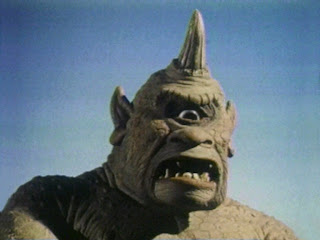 Like some of the other mythological creatures I've talked about, it's not hard to figure out why the cyclops was included in the monster listings. It is, after all, a classic.

The thing is, Mr. Monocle there doesn't seem to get a lot of table time. In a game with almost as many gigantic humanoids as slime-based monsters, it's not hard to -aheh- see how that could happen. You've got ogres, ettins, troll, and six kinds of giants to throw at the PCs. This is a shame, IMO, because the cyclops is such an interesting monster. 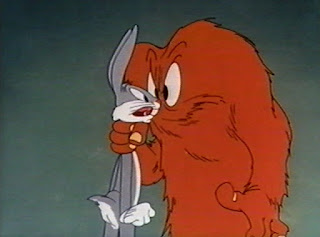 Well, not as interesting as YOU, of course!

As a straight-up combatant, it's not so unusual. It's 20' tall and smacks you with a gigantic club (or chucks boulders at you for 3d6 damage). Its -2 to hit for poor depth perception is an amusing little detail, I think.

While there can be up to 4 of them, their morale isn't terrific, so they could easily break and run, hiding in their caves. Their AC is so-so, but 13HD is a respectable force to deal with (roughly on par with a cloud giant). Like many giant-types, cyclops also have very respectable treasure, making them a choice target for loot-minded PCs.

No, what I like about the cyclops are the little details. They are described as "stupid"  and escapable through trickery. The Expert book also says they raise their own sheep and grapes, which I find an incredibly cool idea. I am imagining cyclops vineyards and wines.

The last little bit I want to mention is, of course, the cyclops'  Curse ability. It is rare (5%), and only usable once a week, but again. a wonderful bit of mythological flavor right out of Homer to add to a night's gaming that can set some fun hooks for future adventures.