Several months ago, I posted an encounter from my then-ongoing BX campaign involving a group of bugbears and an aranea. In it, I mentioned that the spider wanted some giant's blood for an experiment. This is the giant the PCs went after. 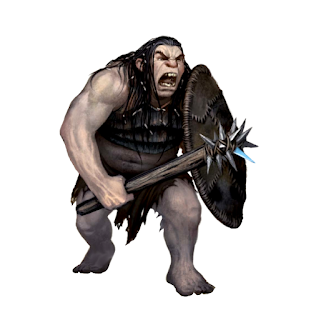 Kaag, the Giant of Soot Hill


For a hill giant, Kaag is an exceptional example of his breed. He is stronger and smarter than most of his kin. Kaag lives in a large hall set partway into a hillside cave. He has spent a good deal of effort to enlarge the cavern and finish the exterior building. The location is known as Soot Hill because Kaag burned all the trees on and around it to give him a better view of anything approaching.


Like most hill giants, Kaag can be violent and greedy, but he usually satisfies these cravings by hiring out to local humanoids as an enforcer. He is paid in food (usually livestock or game), drink (barrels of ale), or treasure (he loves gold in particular).


When Kaag fights, he can hurl melon-sized rocks with great accuracy up to 100’ (yards outdoors) for 2d6+2 damage. In melee, he wields a huge spear of unusual workmanship*. He is unarmored, but carries a large hide shield.

The scrolls are useless to Kaag as he can speak several languages, but does not read. They are hung on the wall as decoration. (He finds the colorful inks pretty)


*The sword is too small for him to wield normally, so he has converted it to his spear point. It grants him +1 to hit and counts as a magic weapon for hitting special creatures. He has no idea of its location powers.


**The gold coins have all been melted down. Most of it coats the skulls of various creatures, including people. These are battle trophies of foes Kaag found especially worthy and sit on shelves around the cave. There are 88 skulls of human, demi-human, or humanoid origin. In addition, there are:

Over the years Kaag has gotten fairly skilled at the process and re-did the older ones to improve the job. The skulls are quite beautiful, if in a macabre way. If the PCs manage to befriend Kaag, he may show off his collection, boasting of his prowess in battle.


There is also a large lump of leftover gold that he re-melts when he wants to coat another skull. The lump contains 1000gpv of unused gold. It lies under a cloth among some sacks and casks (food and ale). 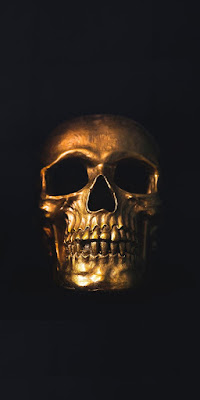