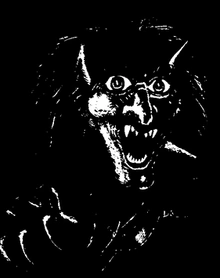 Here's something a little different today. I was thinking about an adventure I had worked on years ago involving a hag killing a village and that got me looking at various versions of these uber-witches in D&D. None of the versions I found quite worked for what I had in mind, so I cobbled this one together from a few sources. It's got a bit of the BECMI rules' version, as well as some Castles & Crusades inspiration. Anyway, here it is in case anyone has some use for it. There's a link to a pdf version below.

Night hags appear as tall (7'), ugly, female humanoids. They are typically dressed in ragged clothes and have jet-black skin that always glistens as if wet. They have lank, tangled hair, jagged teeth and jaundiced eyes. Their fingers have long, iron-like nails. They smell of decay and death.

Night hags are evil creatures from another plane of existence. As such, spells like Protection from Evil will keep them at bay physically, but will not stop their spells or magical powers.

Mundane attacks and weapons have no effect on the night hag. Even non-magical fire will not burn them. Silver and magic will affect them normally. Hags are also immune to charm and hold spells as well as poison and the effects of undead such as energy drain, ghoul paralysis, or mummy rot.

Strength Drain: The claws of the hag are supernaturally cold and if she strikes a victim successfully, they must save vs spells or lose 1 point of Strength permanently. Slaying the hag will restore the Strength score at the rate of 1 point/day. A character reaching 0 STR dies.

Night hags cast spells as a cleric of the same level as their hit dice. They normally choose spells for destructive and harmful purposes, only using healing on themselves. They also have the following innate, spell-like abilities 1/day:

-Animate Dead
-Dark Sleep (Similar to the Sleep spell, but it affects 2d4 individuals, each equal to or less than the hag's own HD.)

Dark Haunting: If a character is put into the Dark Sleep (see above), the hag can forge a magical bond with the victim. The PC must save vs. spells or for every night afterwards, the hag fills their dreams with horrid nightmares. The dreams install evil thoughts into the minds of the victims and they find that the only way to quiet them enough to sleep at all is acting upon these evil impulses in their waking hours. Each day they fail their save (see below), their willpower is too weak to resist and they must commit an evil act that causes actual physical harm to at least one person. The DM might have the victim enter a "fugue state" and be unaware of their actions until after the deed is done (coming to over a beggar's corpse with a bloody knife in your hand, etc.).

The victim of the haunting must save vs poison each day or lose 1 CON permanently. When their CON reaches 0, they fall into a final coma and just before death, the hag appears in their dreams and rips their soul from their bodies, carting it off to the dark plane she originates from. Victims who die in such a way are beyond the power of spells like Raise Dead or Reincarnation to bring back to life. Even Speak with Dead will not work, for their soul is unreachable in the hag's realm. Only a Wish or direct divine intervention can restore a victim to life.

There is no cure for the dark haunting other than the death of the hag that caused it.

Dark Company: Hags attract evil to them. Night hags are found with 3d6 evil creatures in their thrall. These typically include lesser undead, giant spiders or scorpions, trolls, and sometimes goblinoids. These creatures will fight to the death for the hag (no morale checks).