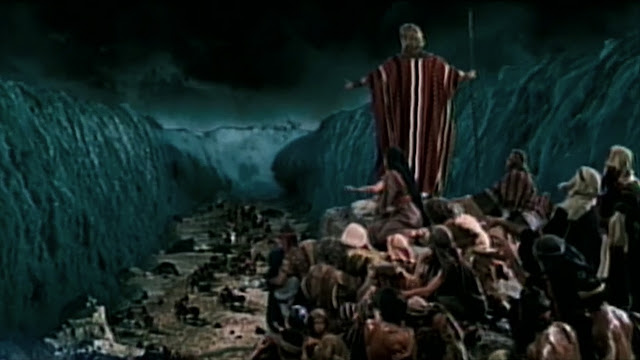 Let's just get the Heston screen cap out of the way, OK?


An amusing and powerful spell. And, like most RSAs, one I've rarely seen a PC use. It's odd that this is a MU/Elf spell in BX rather than a clerical spell given –like some other spells– its obvious mythological origins, but who am I to blow against the wind?

Its pretty high level (6th), so it's understandable why you don't see it cast all the time. Also, it's really only useful when dealing with a large body of water, which isn't too terribly frequent in most campaigns.

This spell creates a path through a body of water, enabling creatures to walk on the bottom. The path will be up to 120' long and 10' wide. The spell may be ended at any time by the caster before the duration is over.


The first thing I notice about the spell description is the dimensions/AoE. Why? No depth! It doesn't care whether you are making a path through a fish pond or an ocean, it goes ALL THE WAY DOWN! Obviously it's hard to do the Red Sea Stroll without it reaching the bed, but still!

The second thing about the dimensions is, well, the other dimensions. Only 120' x 10'? That's not getting you very far. One hour duration is nice if it's only for one combat, but you aren't getting a lot of overland travel done in that time. It would be handy for some river crossings and the like, though.

Now, one fun use of this spell that comes to mind is when it comes to a naval battle: Opening a gap in the water right in front of an enemy vessel? Good times! Of course, you'd want to angle it just right to maximize the effect, but I would say even a big ship would stand a real risk of capsizing or dipping its prow low enough to be swamped.

Like many of these higher level, unusual spells, I would be tempted to place a scroll in a campaign just to see what fun the PCs might come up with.