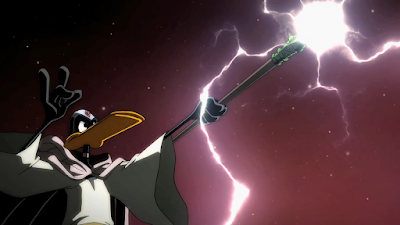 Once again, he is undeterred!

The staff of wizardry is arguably one of the most powerful magic items in the game. It's effectively the BX equivalent of AD&D's Staff of the Magi. Basically, it is three separate magic staves in one: in addition to its own distinct powers, it has all the abilities of the Staff of Power, which in turn can be used as a Staff of Striking. Let's start with the most straightforward of the three and move upwards, shall we?

Firstly, the Staff of Striking lets the wielder have a stronger melee attack than your average MU is capable of (2d6 damage, but costs a charge). While this staff is unusual in that clerics can also wield it, I do not think that aspect translates to the Staff of Power or Wizardry. While it isn't expressly stated, this is usually ruled to count as a magic weapon attack for purposes of hitting special monsters like gargoyles.

The Staff of Power gives the wielder some nice attack spells: fireball, lightning bolt, and cone of cold. Each dealing 8d6 damage! Sure it costs charges, but an Elf or MU toting one of those around is going to have something to bring to almost any fight. I particularly like that he has a variety of damage types to choose from. Fighting something immune to fire? Cone of cold it is!

The Staff of Wizardry is the main event, though. In addition to all of the above powers, it can also cast quite the laundry list of super-useful (and powerful) spells:


These are some awfully nice abilities that aren't tying up a spell slot! Something I hadn't previously considered is that the elemental conjuration isn't just for one kind, it's any of the four! We're not done yet, though.

The staff also allows the wizard to create a whirlwind like a djinn. It also doubles as a wand of paralyzation.

The last trick the staff carries is its "final strike." This release a fireball effect of 8hp damage per remaining charge (not rolled) to anyone within 30'.* This includes the caster or any friendlies, so it's a last-ditch effort, to be sure. It's still mighty impressive.

Staves in BX are found with 3d10 charges, and there is no BtB way to recharge them. So while this is a very powerful item, it is limited. The Elf or MU that found one would probably want to be conservative in its use. With an average of less than 20 charges, it's not going to last forever. In fact, I can imagine an NPC wizard with one who knows it's down to just a couple charges, but does his best to hide the fact in order to appear more dangerous.