Looking over some of the responses to the last post, where I talked a bit about wandering in the wilderness, it seems that people find rules explanations useful. So I thought I'd take a whack at a couple of BX rules that seems to generate confusion for some: Pursuit and Evasion. 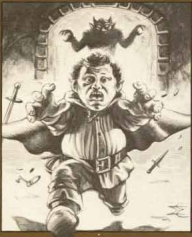 In Basic, the pursuit rules are simply what happens when one side of a (potential) fight runs and the other gives chase in a dungeon. Obviously if the PCs are one of the sides, and the faster of the two, chances are what happens is whatever the PCs want to happen (they catch up, they let them go, etc.).

Here's a basic scenario for pursuit and how it would break down. Unlike the last time, I've already rolled it out and know what happened, so I can provide step by step maps.

The Setup: A band of brave(ish?) adventurers have entered a dungeon. They open a door and step into the room to discover a pack of orcs. 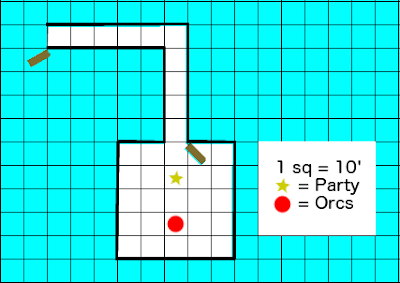 Round 1: Surprise rolls are made and both sides roll 2s. The PCs and orcs stare stupidly at one another for a moment.

Round 2: Initiative is rolled. The orcs get a 5 and the PCs a 6. The orcs' reaction roll is a 5 indicating they are hostile and will probably attack.

The party doesn't like the look of all those snarling tusks and decides to beat a hasty retreat. They use their running speed for movement (60'), which gets them to the corner turn in the hallway.

The orcs take off after them. The monsters have a move of 120' so they can catch the PCs if they want, but the party's magic-user cleverly tossed a pouch of coins on the ground behind him as they fled. There is a 50% chance the orcs will stop for the loot and it turns out they do (I rolled a d6. Odds they ignored it, evens they stopped. I rolled a 4). 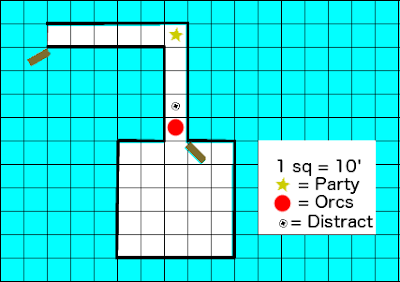 Round 3: The PCs move another 60' and reach the outside and daylight. The DM rules that since the wizard dropped the whole pouch and didn't scatter the coins, it only took the one round for the orcs to retrieve it. They run down the hall and see the PCs out in the sunshine. The DM rules that the orcs don't like the idea of fighting in the daylight and break off pursuit. 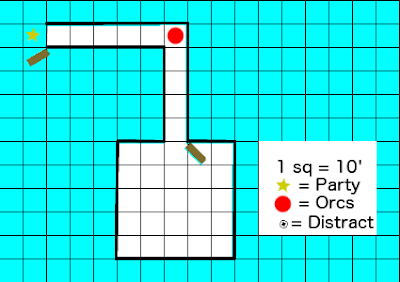 Now, there were a lot of things that could have happened differently there, but that gives you a short & sweet version of it. If it had been an unintelligent creature, like a giant lizard or some such, the party might have dropped food instead of treasure to distract it.

The scale of wilderness pursuits makes mapping it less useful. The rules themselves favor a more abstract method as well. In a nutshell, if one group is surprised and the other is not, the latter may automatically avoid the encounter: remember the wilderness random encounter distances are 40-240 yards! If a group that did not surprise the other wants to avoid an encounter, and the second group isn't having any of that nonsense, then the Evasion Table on X23 is used. The DM is encouraged to make ad hoc rulings for factors like terrain, speed, or whatever is deemed relevant.

A group of four PCs and their three hirelings are traveling in the forest when they spot a group of 10 gnolls though the trees. The DM rolls for encounter distance and gets 100 yards as a result. Neither side is surprised (they spot one another simultaneously) and the gnolls seems hungry. The party decides this is a fight they'd rather avoid and flee deeper into the foliage.

The party has 7 people total, the gnolls 10. This gives a 70% base chance of losing their pursuers. The DM also rules that the tree cover is thick enough to grant a +10% bonus (it would have been higher, but the gnolls' are keen-nosed). This gives the party an 80% chance of success. The dice are rolled and come up 44! The party spends a tense several minutes fleeing into cover and waiting for the gnolls to lose interest.

If the odds weren't as favorable, the party could have upped their chances by splitting up, as smaller groups are more likely to evade bigger ones.

Had the party failed the roll, the gnolls would have closed the distance and -if faster than the PCs- had a 50% chance to force an encounter (using the PCs from the dungeon example, the gnolls are faster with 90'). If the gnolls fail to force the encounter, the party could attempt to evade again, but their direction is random and they cannot map. This process continues until:
There are no specific rules for time increments in a wilderness pursuit, though the text mentions the possibility of a chase continuing for "several days." I feel like there must be something in the books (there usually is), but I don't see it. If I were to run such a situation, I would say each evasion attempt takes an hour, giving the abstract nature of moving through terrain, hiding, looking for signs of one's quarry, etc.

So the next time your group decides to exercise the better part of valor and skedaddle from certain doom, or decides to chase down those wascally kobolds, hopefully this will help clarify a few things.