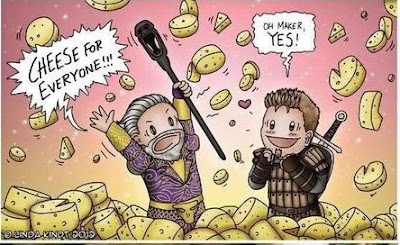 As far as utility spells go, it's hard to get more utilitarian than create water or create food. There are obvious reasons for not seeing either in play more are: Taking up 4th and 5th level spell slots, not to mention how often resources like rations are simply not tracked in a game, especially once the PCs are higher in level and can afford all the beef jerky they want. Nevertheless, these are some powerful spells and, under the right circumstances, could provide a lot of fun for a campaign. But first, let's look at the spell descriptions. Both are from the Cook Expert rules.

With this spell, the cleric summons forth an enchanted spring from the ground or a wall that will give enough water for 12 men and their mounts for one day (about 50 gallons). For every level the cleric is above 8th, twelve additional men and mounts can be supplied.

First a note or two about both spells in general. I find it interesting that they both make specific mention of the characters' mounts. Since these are obviously spells geared toward wilderness/overland travel, it's logical that things like horses or camels would be addressed. Also, the fact that the amounts scale up so quickly. This would seem to move from dealing with a groups like a party and some hirelings to whole military units.

A couple of things about create water: One, note that even though the duration is permanent, the amount of water is finite. In other words, the spring stops springing after about a barrel of water has flowed. Two, there is no mention of retaining the water. By the book, the characters need to be ready with wineskins, bowls, what have you. Nice DMs, may cut some slack here, but if the party is in the middle of a desert, it's reasonable to expect the water to run off or soak into the sand.

Create food is very similar mechanically, but doesn't specify how the food appears or what form it takes. I would assume the food for the mounts is appropriate to the type of animal (grains, etc.). Other editions of D&D describe it as "nourishing." DMs are free to describe it how they will, but I've always imagined it as a sort of gruel or dense loaf. In other words, it will keep you fed, but that's it. Clerics aren't opening restaurants selling the stuff as "cuisine."

Now that we've covered the basics, how might one use this in their games? Well, let's say the party is planning a long trek across a desert to fight a blue dragon. Even if you don't normally track rations or water, you can give the players a gentle heads up by saying something like "The journey may take many days, and there aren't towns along the way. Make sure you have what you need to survive on your own." I'm not saying deliberately screw the PCs over, but if things like running out of food, getting lost, etc. is possible, then forewarned is forearmed.

Now, if there is a cleric in the party, he might prep these spells just in case but doesn't use them. Let's say they get to the beast's lair, kill it, and want to load up the hoard. Gold is heavy. So is water. What can they do? Why, drop the water of course and create it as needed along the way! Or perhaps the dragon (or a random encounter) killed some pack animals and the group has less carrying capacity. 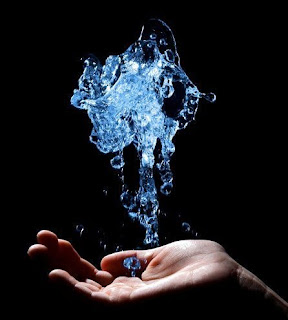 Imagine the PCs are stuck in a siege situation. Create food or water might allow those stuck in the castle to stretch the rations by days or weeks. In a less benign situation, what if there were people in a place with no water. A not-nice cleric might charge for him to cast the spell each day. Heck, 50 gallons+ of water might even help put out a fire!

Despite not having the usual kinds of effects for "adventuring spells," when you're dealing with the possibility of starving or dying from dehydration, spells like these start looking a whole lot less useless.
Posted by Bighara at 10:16 AM