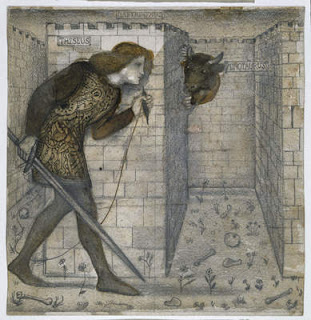 I'm not sure how I missed this one when doing my series on mythological creatures. It's not that uncommon a monster, but it definitely deserves to be in the "myth list."

Game mechanics-wise, the minotaur isn't overly complicated. It's a big, mean, humanoid with some natural weapons. One of the most famous occurrences of the creature in D&D is of course is in B2's Caves of Chaos. I admit, for years I had thought that the (spoilers) directional confusion the party suffers in its cave was an ability of the minotaur itself and not just a feature of those tunnels. (I actually often run it so the effect lifts after killing the beast.) But no, it is not a power of the creature in the book. Speaking of which, let's see the stats.

Okay, so six hit dice is pretty respectable. It actually puts it in dragon territory (albeit the weakest of them). The armor class is not great, but as B2 shows us, they can wear armor. The minotaur has several options when it comes to attacks; horns, teeth, or weapon. The language in the rules is slightly confusing. It states:

"If a minotaur uses a weapon, it may not gore or bite."

Which can be read that it can never  gore or bite if it has a weapon, but again, the Keep tells us differently.


"The minotaur may only use his spear or his horns and bite."

Which honestly makes more sense. The +2 for strength on its damage rolls make even the 1d6 fairly respectable for a simple melee attack.

Minotaurs are described as semi-intelligent, larger than human sized, and man-eating. They will "always attack" smaller creatures and pursue them "as long as they are in sight." This speaks to its high morale and casts them as a bit of a bully (EDIT: no pun intended), temperament-wise. They are also said to be subterranean (usually in tunnels or mazes). They are only listed as wandering monsters in mid levels of the dungeon. They appear on none of the wilderness encounter tables.

This ecology speaks to the unnaturalness of the minotaur and -of course- its mythological roots. It is truly a monster. Minotaurs as described have no culture or civilization. They are strange and vicious things found in the dark places of the world. The term "semi-intelligent" says to me that yes, they can use tools like weapons, use simple tactics or maybe even speak. But no, they probably won't parley or be merciful. They can appear in some numbers, but I see that as a loose hunting packs, not sustainable tribes or clans. The text about always attacking and pursuing seems to support the idea that they are somewhat insane or berserk, and that's how I would run them.

So what does a party do when encountering one or more of these creatures?

Well, a minotaur is the embodiment of a melee brute, so hit it with ranged attacks and spells if possible. It's too strong for Sleep, but Web (B18) is a nice option. While the minotaur is strong, I wouldn't rule it as on the level of "Giant Strength" in terms of breaking loose from the spell quickly. A webbed minotaur could be fairly easily dispatched with arrows. If the thief has a chance to hide, the beast might charge right past him at a likelier target, giving him a chance for a backstab, especially if the monster is unarmored. The gore and bite attacks a good fit for flavor but aren't doing tons of damage. Be more afraid if it carries a big axe or similar. The real danger from the minotaur is its six hit dice give it good to-hit rolls and enough hit points to keep swinging for several rounds. A party of low-level PCs (<5th or so) going toe to toe with one of these is likely to lose a member before taking the beast down.

If the party is unlucky enough to run into a group of minotaurs, the same tactics apply. It's going to be that much harder to weaken or slow them down before a wall of horned rage crashes into them. Area of effect spells, burning oil, and defensible positions (bottlenecks in the corridors, etc.) might be your best bet. 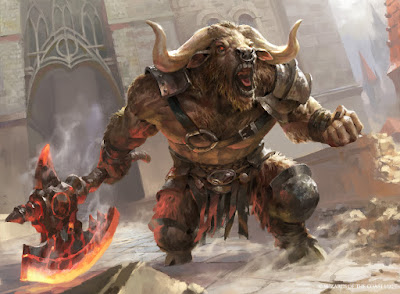