Giving up the Reins

Well, the Traveller campaign has continued on with a player taking over as GM and my taking a seat on the player's side of the screen, running an NPC the party had met before. It's working all right overall as I had not read much ahead in the campaign materials, so I don't have spoilers.

The difficulty is in my letting go of "running" the game I'm in. I'm usually the GM and --for good or ill-- I have a particular style. The new GM's style is not radically different, but it's his own as well. I fear I sometimes may chime in with comments on rules or mechanics when I should just be quiet and play.

On the other hand, one of the reasons I normally GM and not play in our little group is that a couple of the players can, well, be a lot. One is very competitive and dominates a lot of the conversation, making it hard to be heard sometimes without just constantly interrupting. The other favors "storytelling" over rules and die rolls, so he's happier when we don't bother looking up a rule and either A) handwaving the whole thing or B) just letting the GM make an ad hoc ruling and move on. I have no beef with either style, but when I run, I usually only handwave or wing it when the actual rule doesn't exist or is not easily found.

Both of these players push back when I cite rules, but as GM, I have more of say in how we proceed than as a player. The friction between our styles is more annoying when I am just a player at the table with them. I know that sounds a little petty, but when most sessions consist of getting fellow players talking over and interrupting you when you're trying to describe your character's actions or grumbling when you point out a relevant mechanic in the book, the fun level drops.

I know this is more in my headspace than in their actions, but it's just something that I'll need to process. Otherwise it may be time for a break. Game group dynamics are always interesting to navigate. What's strange is that it can actually vary from one campaign to the next. A group of people can play together just fine for one game system, then be utterly derailed when playing another. I'm not sure what the alchemy is there, but it seems a real thing. 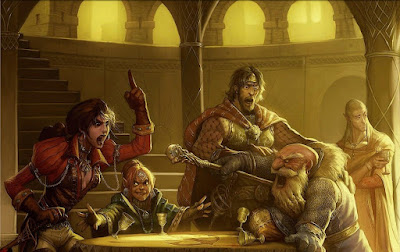