I selected –more or less at random– a lesser used creature from the monster section of the LL core book to ponder how to use them in a game. Today's selection is:
Bear, Grizzly
Bears are a quintessential forest creature. Weirdly, it's not listed as a random encounter in LL. Compared to some of the things that ARE on the wandering monster charts, it sounds almost blasè.

A bear? As in a single woodland critter? Yawn. 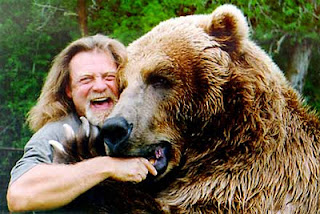 Awww! Isn't he SWEET JEEBUS LOOK AT THOSE CLAWS!!!

"These large bears average 9' tall, and are more aggressive and interested in meat than black bears." (LL65)

So, chances are you are only going to encounter one of these shambling terrors. As GM, if it were a multiple beast "in lair" encounter, if I were being NICE, I'd say you've hit upon a mother bear and cubs situation (only one adult, but no morale checks). If I wanted to be evil, I'd say it's a couple males fighting over a mate and everyone is feeling really aggressive. Even those extremes aside, bears are territorial critters and mislike guests.

At 40'/round, a bear is moving faster than most PCs who are armored or encumbered. It can outrun and outclimb you. It can smell and hear better than you, but its eyes are so-so, but that just tends to make a bear grumpy. If a bear had a real-life alignment, it would be Neutral Hungry. They are some of the true omnivores of the temperate world. They are ALWAYS looking for food. Now, it's morale is not so hot, so you might spook it. On the other hand, you might just tick it off. 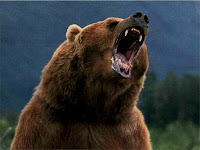 As a 5 HD critter, it's hitting pretty often, and it is immune to the ubiquitous Sleep spell. Its hide is equivalent to freakin' SCALE MAIL. It's dealing approximately one PC's hit die worth of damage every round it hits.

I wouldn't expect a single grizzly to wipe out a party of even 1st level PCs, but a PC death (or two) wouldn't surprise me either.
Posted by Bighara at 11:46 AM