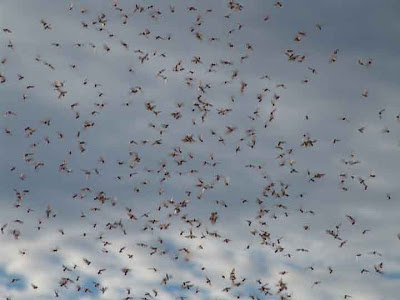 Maybe it's the fact that it's a higher level spell, but I don't think I've seen this one used too often. 5th level clerical spells include such standbys as Raise Dead and Dispel Evil, so – unsurprisingly– I.P. often gets left on the back burner.

That said, since clerics can pray for whatever spells they want from their list, I can think of cases where it could come in darned handy.

HOW long??! It can last the WHOLE FREAKING DAY! Of course, the cleric has to concentrate on it. The range is pretty impressive too. Don't forget that changes to 480 yards when you're outside.

Now let's look at what the spell actually does once it's cast. It creates a "vast swarm" of bugs (60' diameter) they "obscure vision" - meaning you can't see to target the cleric bringing the bug cloud down on you. It also "drives off" creatures of < 3HD. No limit on number, no save, just area of effect. So that horde of 1HD mooks you brought to mess with Father Locust? Off they run.

I mentioned the spell requires concentration, but the caster can also move the cloud around. I can imagine priests casting this and really messing with enemy troops on the battlefield.
Posted by Bighara at 2:13 PM