While talking with my wife, I made a common lament. "Where does the time go in a day?" Her glib reply, "Time Goblins. They eat it." That stuck in my head, and here is the result. 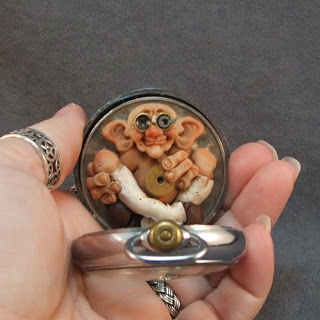 Time goblins look like small (≈1' tall), pale goblins when they can be seen at all. They have the innate ability to turn invisible at will and are quite adept at sneaking around.

Time goblins do not typically attack with force. They prefer to stealthily rob those who pass too close to their lairs. They do not steal trinkets or coins, though. What they take is time.

Once per day, a time goblin can "steal" an hour from a group of up to ten people. There is no saving throw. The party is simply an hour further along in time than they thought. The day is simply that much closer to over. Any wandering monster rolls or replenishing of things like torches that should have occurred in that time happen at the end of the missing hour. If the party was moving when the hour was taken, a rest break is needed as well.

No one knows what happens to the time, but it is believed that it somehow lengthens the time goblin's lifespan, often making them nigh-immortal.

Time goblins usually live alone, but sometimes small warrens of them can be found beneath fairy rings or in tunnels and caves. There is a 10% chance that, hidden in the warren, is a small crystal bottle of wine. Drinking the contents acts as a single dose of a Time Stop potion (2 round duration).