Over the next few days, I'm going to take a look at a few of our fine-feathered monster friends. Today's entry? The Pegasus.


Another mythological classic that appears in just about every version of the game. Many's a PC has wished for a pegasus mount. I have a feeling that other gamers may have seen more of these creatures in play than I have. I think, for me and my group, that flight –the very thing that makes them cool– makes them harder to run and use in play. 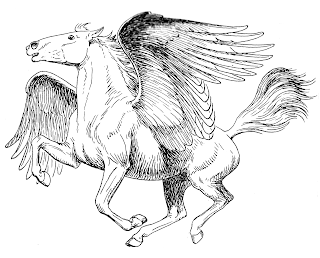 It's a FLYING HORSE! I don't care who you are, that's cool. Apart from flight, they are listed (in Cook) as "semi-intelligent," which puts them a notch above most animals in the IQ department. I imagine that makes them fairly trainable (see below). As for the stats...

Apart from flight, they are approximately halfway between a war horse and a riding horse, but with better AC than either. As a foe, their main advantage is their tremendous speed in the air. They are among the fastest of the fast. That 480' is only matched by some birds (rocs, and normal-sized hawks). Nothing beats it on land, sea, or air. Dragons? Pshaw! Half a pegasus' speed. Even magic, like flying carpets, can't beat them. For transport, you have to go to teleportation to get there faster. 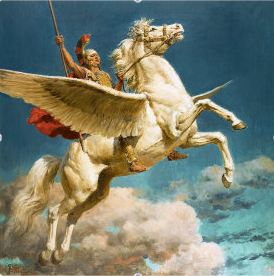 The are described as "wild and shy." Also "they cannot be tamed, but will serve Lawful characters (only) if captured when young and trained." They are also described as the natural enemies of hippogriffs, which is a nice bit of Gygaxian naturalism, I think.

I don't see a party having to fight pegasi too often. Although if some lord wants a pegasus mount and hires them to capture a foal, the herd might not take kindly to that.