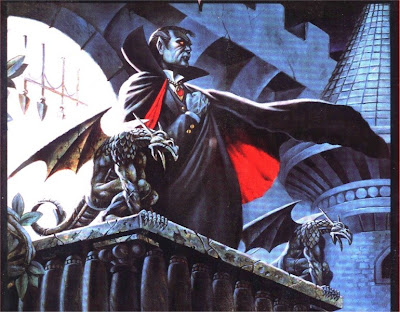 I know Strahd is AD&D, but it's an iconic bit of gaming art.

Vampires. You gotta love the classics. While our fine fanged friends don't fit the bill as an "obscure" monster for my RMAs, they are a complex enough creature to run that I think they are used less often than they might be. Also because of their sheer lethality.

Within the scope of BX, the vampire is arguably one of the most powerful types of undead. Spectres are scary, to be sure, but the only undead that tops the vampire IMO is the lich, and he doesn't show up until the CM portions of BECMI.

As much as I like all that the vampire brings to the table as a foe, running a vampire combat is a bit tricky, as there is a lot to keep track of. Take a look at just some of the fun these things have in store for a party:


Sure, they have things working against them too, like holy symbols and garlic and sunlight. Being an intelligent form of undead –and having that whole immortality thing working for them– a clever vampire sets himself up carefully to bulwark against these vulnerabilities. Minions, both mortal and undead, can protect him and perform missions. A modicum of wealth and discretion can even keep his true nature a secret.

A vampire, even beaten, is likely to get away and return to hassle the party again. Between turning to vapor when they reach 0 hit points, or simply flying off as a bat, or charming PCs to aid their escape, they make marvelous recurring villains. Coupled with their wealth of offensive capabilities, any but the most powerful of characters facing a vampire are in for a rough time.

All of the above would still be true if it weren't for the horror that is the vampire's draining attack. Two levels in a hit means nobody wants to get near this thing, which means those without ranged magic (spells or bows) are pretty ineffectual unless they brought holy water along.

Clerics can turn it, but not until 6th level minimum. It's true 11th level + clerics are destroying the monster, but the vampire is smart, he will avoid this by throwing minions at the cleric and staying out of the way until he can strike from surprise. If the vampire gets a hit in on that cleric, suddenly he's not high enough level any more! Or maybe he can charm the cleric, making the point moot.

So, tell me, what's your experience running these bad boys? Check out the poll up top, too.