I know I've been gone a while, but here is something to mull over. 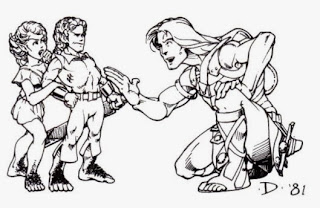 I've been working on a Moria-related project lately, and that got me thinking about hobbitses.

The PC races often are unusual encounters. As I have noted previously, "monster" listings and PC race descriptions are not always 100% identical.

Halflings are probably even more unusual because, apart from the above:

A) There are probably very few DMs for which they are a go-to encounter.
B) They are rare random encounter, only appearing in two places on the BX charts ("city/inhabited" & dungeon level 1).
C) Halflings as monsters? Seriously??

Since halflings tend toward Lawful, they aren't likely to be marauding through the countryside. However, there is something to keep in mind here. Namely, that at low level, they are the most lethal class in the book.

No, seriously! Look at the stats.

Their only drawbacks are:

So these little furfoots are actually pretty tough!

As an encounter, you can be running into a dozen or so of these little guys. Considering that they are very good at ambushing, you can be in for a hail of arrows out of nowhere if you aren't careful.

Granted, their morale isn't awesome, but that makes sense. They aren't rabid fanatics. Chances are if they are fighting you, you've somehow threatened them or their home.

In their villages, you have the added wrinkle of running up against their leader (up to 7th level!) and maybe a dozen 2HD militia. Not a fun time if you've got them feeling prickly. 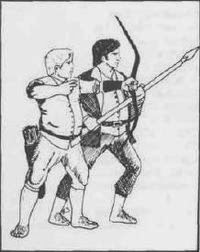