I think any discussion of crocodilians and their ability to intimidate is best summed up by the World's Greatest Secret Agent, Sterling Archer: 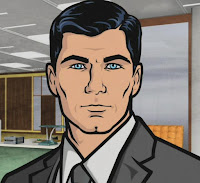 "Maybe deep down I'm afraid of any apex predator that lived through the K-T extinction. Physically unchanged for a hundred million years, because it's the perfect killing machine. A half ton of cold-blooded fury, the bite force of 20,000 Newtons, and stomach acid so strong it can dissolve bones and hoofs."

In BX, alligators, crocodiles, caimans, etc. are all basically crocs for stat purposes. Which is fine. The DM can describe the subtle differences in scales and jaw if he wants, but all the players are going to be thinking is: 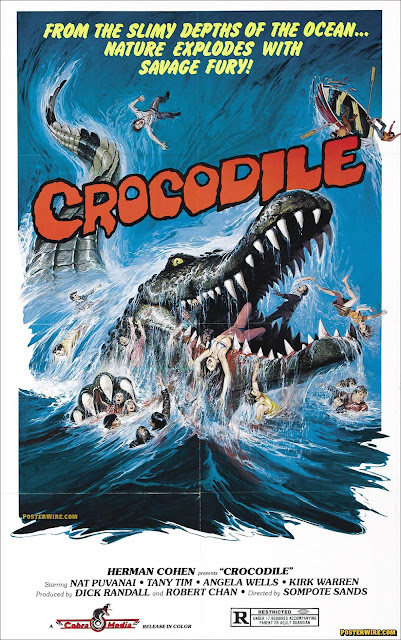 I don't know how much these critters have gotten used in people's campaigns, but I can certainly see them coming up in swamp or river-themed adventures. Certainly that is where they are most likely on the wandering encounter tables.

Since I looked at these originally as part of the "Lost World" series I started with Neanderthals, we'll begin with the giant croc.

These are described as only appearing in lost world regions or settings and over 50' long. They can and will attack small boats or even ships.

Now, to put fifty feet long into perspective, we will assume that includes the tail (as most of these measurements in the real world do). Here is a photo of a fairly enormous croc (this is real): 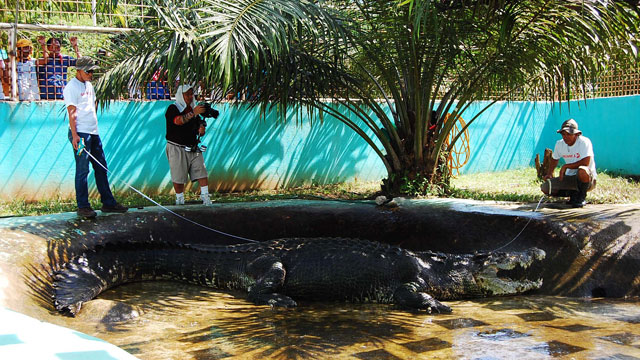 That is Lolong, the largest crocodile ever captured (d. 2013). Lolong measured in at 20ft., 3 in. and was a saltwater variety from the Philippines. So imagine more than x2 that long, which means a LOT bigger in terms of mass. The biggest prehistoric "supercroc" known was Sarcosuchus, which came in about 40'.

OK, enough of the Discovery Channel stuff. Onto the stats! 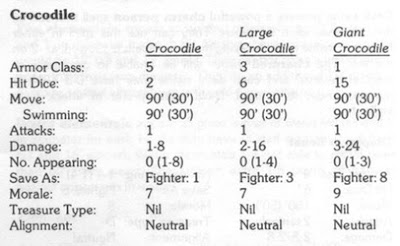 The different sizes are really just for threat scaling (no real changes other than bigger stats). So obviously 15 HD for the giant version is kinda scary (more than dragons). AC is fair and its damage is rough. Even the smallest type would be a nasty surprise while crossing a river or similar.

It's important to note something about these critters (all three types) and this is based on the real-world versions: They can run as fast as they swim. An encumbered character may well not be able to outrun a croc.

Crocs are reptiles, which is to say they aren't super-bright. They are also not super-emotional. This is reflected in their morale score. If a meal is proving too difficult (or pointy), they may well give up and move on. They are great ambush predators, though. So there's always the chance they pop up again when you least expect it.

As a DM, I would use them tactically. Knocking PCs out of their canoes, etc. or striking from the reeds and shallows. Once the PCs are in the water, they are usually -quite literally- out of their element. A swamp witch with an animal control magic item or spell could turn things ugly real quick.