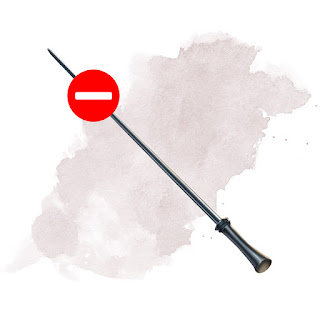 The wand of negation is a fun one for a couple of reasons. 1) It doesn't show up very often (at least in my games), so unusual items can lend themselves to create unusual situations. 2) It is an item specifically designed to counter other items. Like a less powerful rod of cancellation, but more specific in nature (and with more charges). 3) It is one of the few examples of pre-declaring actions in initiative.

The item's description is fairly brief, so here it is from Cook (X50) in its entirety:


"A charge from this wand will cancel the effect of one other wand or staff for one round. The user chooses the wand or staff to be negated and the decision to use it must be announced before rolling initiative."

I suppose this could be read as negating an effect that has already taken place, but that doesn't really make sense. So many effects from wands and the like are instantaneous. How do you negate a fireball that has already gone off? It seems more sensible that the wand would suppress the use of the opposing item for that round, which ties nicely in with the initiative qualifier.

So it is, in effect, a highly specialized dispel magic. A MU or elf with one of these could be a very effective countermeasure to an enemy spellcaster. If you recall from my previously referenced post on initiative, the idea that a caster must pre-declare casting a spell before initiative is rolled. An enemy with higher initiative could attack the caster and "disrupt" the spell before it goes off. Mind you, there is nothing in the rules about pre-declaring using a wand or staff, though.

I wrote the example below as much to show a spellcasting type making themselves useful in a fight without actual casting as I did to show the item itself in action. I find it helps me to make up these sort of in-game situations to visualize how different spells or items might be utilized.

So imagine a scenario where a party which includes an MU who has this wand, but is out of spells for the day encounters a hostile bunch Orcus-worshippers including an chaotic priest wielding a staff of command.

1st Round: The cleric tries to remove the enemy spellcaster from the board by using the staff on the MU. He makes his save, but can see that the cleric has some bad juju at his disposal and gets the wand ready.

2nd Round: The MU's player pre-declares he is targeting the staff and rolls well for initiative. When the cleric starts to point with the staff at the next foe. FZZT! Charge wasted. The cleric sees what is happening and does not want to waste his precious charges, so he puts up the staff and grabs his unholy symbol. The MU sees this and, since the wand only works vs other wands (or staves), he draws a dagger. Not really playing to his strengths, but it's better than nothing.

3rd Round: The cleric, being an NPC, doesn't "declare" he is casting a spell, but the DM tells the players that the priest is holding up his symbol and starting to chant. The MU beats him on the initiative again and flings his dagger at him. It hits, but only for 1 point of damage. That's enough to disrupt the light spell the cleric was trying in order to blind the MU. By the book, the cleric also loses the spell as if it were cast. By this time the other PCs have smacked down several of the minions and closed with the priest and he's got more on his mind than just the MU now.