Moldvay Musings XV: I Do Declare! 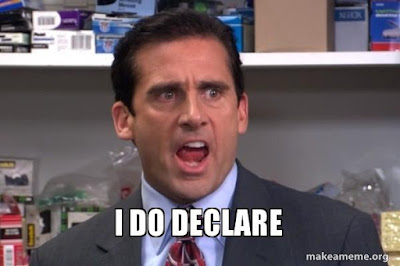 In an earlier post, I touched on situations that require "pre-declaring" actions in BX. That is to say, before initiative is rolled. This is an interesting artifact of older D&D, as I do not think it is used much in "modern" RPGs. Honestly, we've hardly used it ourselves in my group and I don't even recall using it back in the day. Maybe as my beard grays my gray matter is getting a bit tired.

There are a couple of reasons I think this idea has fallen out of favor. For one, it feels a bit more like a legacy mechanic from D&D's wargame roots than something that was consciously added to the early game; kind of like the whole idea of phases to one's actions (Melee, Ranged, etc.). Newer editions by contrast simply tell the player how much of which kinds of actions they can complete on their turn.

The second reason is that pre-declaring can feel like it is making it harder for players to react tactically in an encounter. If I already declared I was casting Bless, then does that mean I can't switch to Cure Light Wounds when I see our fighter get wounded?

These are valid concerns and they do affect the nature of game play, but before dismissing them out of hand, let's look at some of the benefits of this rule.


Personally, I could see going either way with this rule (ignoring or implementing). On the one hand, I know that players generally are loathe to be limited by arbitrary mechanics, but on the other, I do think that this could bring an interesting wrinkle to the game. Some house rules I might consider if I were to try it could include things like: