These always seemed sort of the "poor man's golem" to me. They are much less powerful overall, and fill basically the same niche. They are immune to Sleep, but lack the other "golemic" immunities. Nevertheless, there are some fun bits in these entries for those who care to give them a whirl.

The B/X rules list three examples, but suggest the DMs feel free to make up their own living statue types. Here's what Moldvay gives us:

A couple of things strike me as I'm looking at the stats. First off, they have different alignments. Not to mention having alignments at all! This, coupled with the lack of Charm immunity, makes me wonder if they have sentience of some sort. This is further reinforced by a morale of 11. Not 12 like a golem, 11. So that means it's possible for the thing to flee. Verrrry interesting. 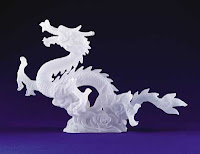 Crystal statues offer a lot of interesting possibilities. Imagine one that looks like a crystalline rock formation, ambushing spelunking PCs and blending in with the cavern walls. I also imagine beautifully formed ornamental statues in a palace or temple that serve as guardians when needed. PCs might even be loathe to smash one because it looks valuable. They aren't too scary by themselves, but up to six of them with 2 attacks each? That's a rough encounter for low-ish level parties.

Iron statues have the amusing feature that they seem to be giant magnets. A non-magical weapon that strikes it gets stuck until the statue is killed. I would find it amusing to have it flee with the party's gear stuck to it except that the thing is so darned slow. Even without that, two 1d8 attacks per round is a rough time for someone. 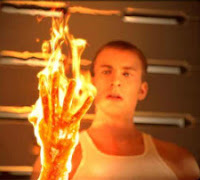 Rock statues are kind of like the Bronze Golem with their lava innards, but instead just heat and scalding hemorrhages, they spray this stuff out of their fingertips like a super-soaker for 2d6 x2 per round! Hilarious!