Magic With A Cost

Talking before about cursed magical items, it seems obvious that the trend is to have something that looks like a nice piece of loot, but in reality is trouble. Players will immediately start looking for ways (in character and out) to get rid of the object in question. If you have an in-party cleric capable of Remove Curse, then it's almost a non-issue.

Now, while I went on for a while about how the cursed items in the books are fun to use (and they are), I think that there are a lot of other ways to introduce a "minus" into the equation while at the same time, making the player feel like there could be reason to hang onto the bauble.

One of the easiest ways to do this is the "double-edged" item: a magic gewgaw that gives you power, but at a price. A "Berserker Sword" is an obvious example of this. The wielder gets nice bonuses in a fight, but goes into a frenzy, possibly even attacking his comrades.

You can extend this idea to other items. For example: 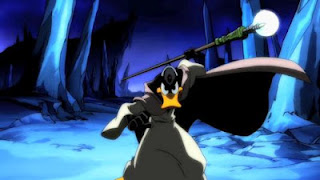 The trick here is not to go overboard, but at the same time, if there are ten "normal" versions of the item around for every "interesting" one, the PCs will never touch it.