Fee Fie Fo- you get the idea

My group is getting ready for a run through of G1: Steading of the Hill Giant Chief. It's been over 20 years since I played any part of the module, so it should be a fun time. (We're using LL+AEC if you're interested.)

Anyhow, this got me thinking about GIANTS. Even in BX, you've got the six varieties, in escalating size and power: Hill, Stone, Frost, Fire. Cloud, and Storm. I've often wondered why so many? It's kind of like dragons, I suppose, where the authors wanted to include lots of good bits from mythology and folklore, but not lump them all together in one monster. 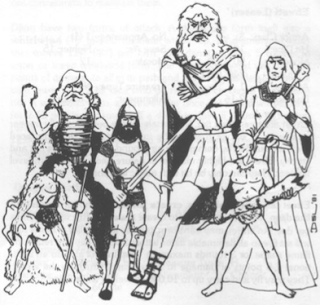 One thing that strikes me about all the giants is the treasure. They all have the same type ("E") plus 5000gp. (The ogre –aka "Giant Lite"– is similar with Type C + 1000gp). Where does this come from? Jack & the Beanstalk? Mythology? Probably a combination. Regardless, giants are a pretty lucrative monster to fight.

Hill Giants seem to be basically bigger, tougher ogres. Primitive brutes who eat just about anything.

Stone Giants are fun with their bouder flinging skills and pet bears. A pair of 9HD giants + up to four cave bears is a scary place!

Frost Giants are the first "supernatural" giants, obviously borrowing a little from the Norse myths with their cold immunity. They like to keep polar bears and wolves about. Even just one of these blue meanies is a truly challenging encounter.

Fire Giants –based (I think) on Surtr from the Norse as well– are also magical, with fire immunity. They also keep nasty pets (hell hounds and hydras).

Cloud Giants have got that castle in the sky/beanstalk thing going on. Giant Hawks hang out with them if their lair is airborne.

Storm Giants are frankly weird. Maybe they're in the sky, or MAYBE they're on a mountain, or MAYBE they're underwater! Who knows?? They are the biggest and toughest of the bunch, but like (gold) dragons, the toughest is also the most likely to be the nicest with their Lawful alignment. Their storm powers are impressive as well.

I'm not sure I have a point to all this other than reflecting on these iconic creatures and seeing all the interesting little rules that were included with them.

...Also to mention that a Girdle of Storm Giant Strength is a potential campaign wrecker!