Cook's Expert Rules typically tries not to step on the toes of its predecessor, Moldvay's Basic. One area where BX does sort of repeat itself is with NPC parties.

Each book provides rules for the DM to use in creating a group of NPCs. Because of the change in PC power levels, things get ramped up a notch in Expert. Moldvay allows for up to 3rd level NPCs, whereas Cook gives rules for up to 12th.

I find both books' sections on this very interesting reading. Not just for encounter design, but also for the steps given for creating the parties. There is a lot of randomness in the process. I find that refreshing, though. Sometimes random results are the most interesting. There's a chaotic fighter and lawful cleric in the group? How does that work? Especially if one is significantly more powerful than the other. This can make for some interesting moments at the gaming table.

Fun fact: NPC spells are supposed to be assigned randomly! I love it when characters (NPC or PC) have some of the more unusual spells.

Another interesting part is the assigning of magic items to the NPCs. In Basic, you roll on a treasure type for the NPCs. In Expert, a % chance is assigned (determined by level) for each NPC to possess a given type of item. The fact these non-PCs are walking around with magic loot (and using up that cool wand's charges) should get the PCs interested.

I think a rival group of adventurers is an awesome encounter, and provides a lot of possible campaign hooks for a group. Even if the PCs don't end up fighting them, having another group of murder-hobos out there after the treasure is a powerful incentive to get off their duffs and DO something!

I have half a mind to assemble an NPC party by these rules and use them as pre-gens for my next adventure. The result could be fun! 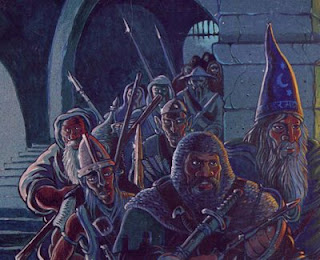