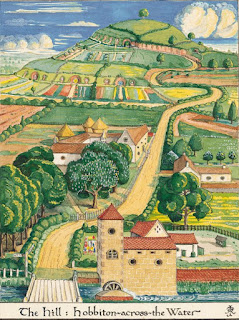 "In a hole in the ground, there lived a hobbit."
HELL YEAH!

Mr. Jackson's version of Middle Earth is back in theaters and, like a good little nerd, I went to go see it. I didn't do 3D or 48fps, but see it on the big screen I did. Here are my thoughts on the subject:

(Like my John Carter review, the first part of this is spoiler-free, but honestly now; if you've never read the book or at least seen the animated Rankin-Bass cartoon or you haven't gone to see the film already, you are unique among my tiny readership.)

First of all, let me say I liked it. I liked it nearly as much as I enjoyed it when I first saw Jackson's Fellowship in the theater. Now, I saw FOTR five times in the theater, and I probably won't do that this time (Of course, I didn't have kids back in 2001, so that's a factor in my theater-going record since then.)

Hobbit is Hollywood-ized a bit compared to the books, but then so were the LOTR films. A few liberties were taken with some details, but the overall plot stayed true to the source. I was amused to see what looks like unused or prepared well in advance footage of Bilbo and Frodo (Sir Ian & Mr. Wood) during the prelude. It was a nice touch, I thought.

Martin Freeman does a wonderful job as the younger Bilbo. His flustered Brit is perfect for a Baggins who is swept off his feet and out his door into the wide world beyond. The dwarfs made sincere efforts to distinguish themselves among the throng, but tended to blur together at times. Perhaps by the next film they'll each have had more screen time to establish their personas in our minds.

Cosmetically things worked well. I will say that I would have liked an older-looking Thorin (he was nearly 200 at the end of the book), and a Kili with a real beard (at least a goatee, but STUBBLE? C'mon!)

The biggest issue I've heard about the film is the pacing. A few areas do seem to drag a little. It all comes back to the decision to make it into three films. I too find myself scratching my head at the concept. There simply isn't enough book there for a trilogy of 3 hour films. They are including material about Gandalf and the Necromancer (a topic only touched on in the source material), but even so, it seems excessive. I will give Peter Jackson the benefit of the doubt for now, though.

The movie covers from the start (including exposition about Smaug coming to the Lonely Mountain) through the eagles taking the group to the Carrock. Which –if you're looking at the plot covers approximately a third of the book's substance– so good choice there.

I liked the scene with the trolls (the first real crisis faced by Bilbo & co.). There were a few small changes to the plot, but mostly superficial ones. The trolls were comical, yet menacing. The dwarfs put up a better fight in the film than the books, but having one sack after another plop down over the dwarfs' heads would have been dull viewing, in my opinion. 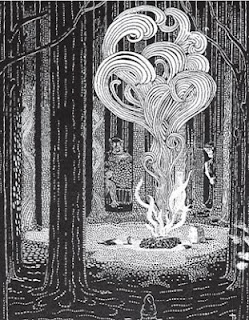 Rivendell was gorgeous, as expected. Elrond seemed in a less somber mood for most of it, but that was fitting considering the nature of his visitors. The White Council bit was interesting and provided some obscure (but canon) explanation for Gandalf's real interest in Smaug. He knows trouble is brewing. I tmay be a ways off, but its coming. He does NOT want an ancient dragon like Smaug in the equation. So, Gandalf seeks to find a way to remove him. He cannot find someone to slay the wyrm, so he helps the dwarfs on their way to -aheh- beard the lion in its den. I assume he hopes they will act as a catalyst and bring the situation to a head prematurely, though it seems a bit callous to me. Who knows? I won't meddle in those affairs.

The trip into the mountains and the giants were pretty cool, but present a fairly different view of Middle Earth than the LOTR films, where half a mountain will stand up and chuck the other half at some other titanic rock-creature just for giggles.

The secondary characters were hit or miss. I was nonplussed about the inclusion of Azog as a persistent antagonist, but I can see the dramatic opportunities it presents. I was pleased to see the inclusion of Radagast (a character I've always been fond of), but he was too comical for my taste. Perhaps it was an attempt to appeal to children (my friend's kids LOVED Radagast). I found the depiction of the Great Goblin –and Goblin Town– a lot of fun, but I understand how some people found it goofy. (More on that in a moment.) But first, Gollum. 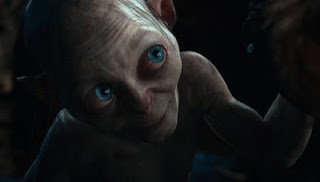 What has it gots in its pocketses? An Oscar nomination!?

I thought Serkis was robbed of a Best Supporting Actor nomination back in Two Towers. He was that good, IMO. The whole CGI thing made the Academy feel it wasn't a "real" role, but animation (different category). Gollum is every bit as good in Hobbit. I even like how they deal with him losing the Ring. The riddling is nigh perfect, too.

Okay, moving on. the movie finishes up with the dwarfs escaping Goblin Town in a Rube Goldberg-esqe fashion, reaching the woods and reuniting with Bilbo, only to get cornered by goblins and wargs, including our buddy Azog again. The resulting brouhaha is again, more Hollywood action flick than the book, but suitably impressive-looking. Bilbo gets a little bit badass by tackling an orc, but what the heck at this point. Again, like many scenes, it probably could have been a few minutes shorter but they have to fill the screen time somehow. The eagles arrive and rescue the group and take them straight to the Carrock. Everyone is in one piece (more or less), but definitely in need of some help. The perfect set up for them to go have a conversation with a giant werebear, don't you think? 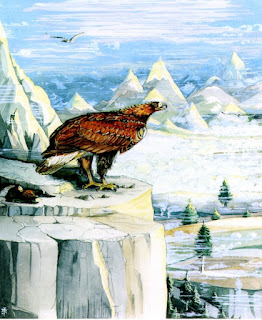 There is a final scene where we see Lonely Mountain and the massive hoard inside with a teasing peek at Smaug, but the big reveal is saved for later (as well it should be).

Overall, the film is solid. It's not epic, but it doesn't need to be. There and Back Again was originally a children's book, not a sweeping saga. There are whimsical elements present that are simply lacking in LOTR for the simple reason that the latter is intended for a different audience. If anything, I think the films might benefit from being shorter, lighter in tone, but faster paced. One film is probably not enough, but two long or three normal length movies would be ample, I'd think. I expect we'll see a lot of action time taking up in Smaug's attack on Lake Town and the Battle of Five Armies toward the end.
Posted by Bighara at 2:06 PM