Little Dungeon on the Prairie

I've been reading my daughters the Laura Ingalls Wilder "Little House" books. Right now we're on "Farmer Boy", but I've been reading ahead a bit. By "a bit" I mean I'm on the 8th book (Hey, they're kids books!). I'd never read them as a kid, so it's interesting to fill in the literary gaps.

In "Big Woods" (the first book), Charles Ingalls (Pa) farms and hunts and traps in and around his tiny farm and log home in the forests of Wisconsin. He and his family live an almost subsistence lifestyle. One or two trip per year to the "town" of Pepin account for the things they cannot easily make or find for themselves, most of which are obtained by trading furs. As time goes on in the series, the Ingalls encounter more and more of the modern era (railroads, threshing machines, store boughten goods, etc.).

Why am I bringing these books up on a gaming blog? Well, it occurred to me that they paint a fascinating picture of a partially pre-industrial lifestyle, tempered with the periodic incursion of "modernity." To me, this depiction of mid-to-late 19th century frontier America carries a lot of material to model your typical farmer/villager in a D&D fantasy world if you put magic in place of technology –hardly a new idea, I know. 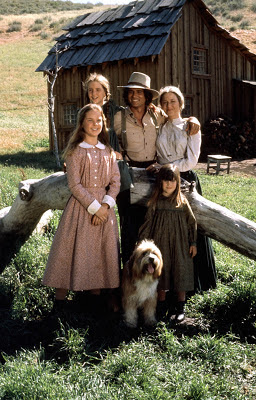 Not Pictured: The unicorns in the barn.

A few things in particular draw my gamer eye in these books:

I think sometimes we (gamers) tend to think that our culture and era's realities can be applied to these imaginary times and places. While I do think that many parts of human life are nearly universal, it's interesting to see how people used to live and think and see how different it might be. It's also fun to think about applying those things to the game and how it may change what the players can or can't do.