First off, let me bore you with a little bit of shoptalk.

I just got back from Garycon last week. It was great fun and I had a blast, playing, running, and working the vendor hall. Of course, having been an exhibitor, it meant wearing my "publisher" hat a little more than I normally would, but one the plus side, it meant my ego had the satisfaction of people asking me to sign some products (Really! I swear!) and having Frank Mentzer call me over saying "Jeff! I need to talk some business with you!" So, yes, while a small-press RPG publisher is not making money hand over first, the nerd cred is gratifying in a hobby I love.

That said, I have two products I am writing simultaneously. One has seen playtesting and is in rewrite stage now. The other is in rough draft form, less one section we decided to add at the last minute (that's been giving me minor fits, but mostly a matter of slogging through it). There are maps to clean up and other steps that will have to happen from there, but the point is I have projects on my desk to keep me plenty occupied.

Now, in case you didn't know, I have a day job. It gives me enough flexibility that I can, for the most part, block off my time to get my work done and still push ahead on my writing projects around the edges. But the job is my livelihood, not Faster Monkey.

Like so many writers and other "creative" types, it is terribly easy to get sidetracked by life and the internet. (If you've never seen the Simpsons episode in which Neil Gaiman guest stars; Lisa's writing troubles? THAT! EXACTLY THAT!)* which brings me to the title of today's post: Wasting Time.

When you look at the hours in the day, it seems like there are enough to do what you want to do, whether it's writing, cleaning the house, exercise, fixing that broken lamp, etc. but somehow the time just slips away. You just pop over to Facebook for a minute, you watch that one YouTube video, or you decide to go grab a Starbucks. Next thing you know, the day is over. Of course, life is filled with plenty of distractions beyond your control: kids, jobs, flat tires, errands, etc. too, but enough of them are of your own making, that it can be infuriating sometimes.

It is one of the ongoing challenges in my life (and many other peoples', I suspect) to budget time wisely and effectively. Reams of self-help advice have been written on the subject. I don't pretend to advise anyone here, I'm just noting that the condition exists. (In fact, just writing this blog post about it instead of working on stuff is evidence of the condition itself!)

Now, onto how all this relates to gaming.

I mentioned trying to get things written for publication, and of course the same issues would apply even if the adventures were just for personal use (though perhaps to a lesser degree). Apart from players (and GMs) dealing with prepping and making time for gaming, I wonder at the characters and their time management skills.

Keeping track of time in the dungeon makes sense. After all, you've got wandering monsters, torches burning out, rations, etc. It also makes sense when talking about travel time. Are you riding or walking? Is it rough terrain or a smooth road? Or are you taking a ship? What are the prevailing winds? The list goes on.

What about PCs that are just easily distracted or lazy or overworked? Do player characters ever say "I meant to get my armor repaired while we were in town, but there was a great game of cards down in the pub and I lost track of time." or "I was going to transcribe that spell at the mage's guild, but I found a note tucked between the pages of a book full of dirty limericks about the faculty. It was HILARIOUS!"

In truth, I don't even know that it would really add to the overall enjoyment of the game, but it might provide some amusing roleplaying fodder. 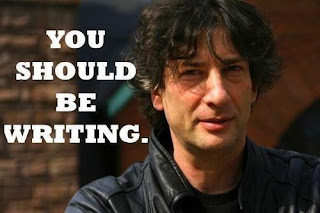