Over the last few weeks, for those of you that aren't aware, Wil Wheaton's "Tabletop" web series has been running a pencil and paper RPG campaign that was a promised stretch goal from their Season 2 Indiegogo fundraising. The name of the campaign is Titansgrave: The Ashes of Valkana and airs weekly.

Now whether you enjoy watching other people play an RPG or not why I mention this. Rather, I wanted to talk about the game system they are using. It is called Fantasy AGE (which stands for Adventure Game Engine) or FAGE (as some have begun to call it), and is new from Chris Pramas and Green Ronin Publishing. Pramas and GR hold a special place in my gaming heart because it was they who revived and (IMO) improved my beloved Warhammer Fantasy Roleplay with its 2nd edition (The "Black Industries" version). WFRP 2e is one of those games that I squeezed a TON of fun out of and would play again at the drop of a small but vicious dog.

The AGE system is not exactly new. GR had used it before in their Dragon AGE RPG. However, like WFRP and the Old World, DA is tied to a particular setting. In this case, the one from the Bioware video game by the same name. FAGE gives you the mechanics divorced from any default setting.

After watching an episode or two of Titansgrave, I was intrigued enough to grab a copy of the pdf when it was released just before GenCon. After reading it though a few times, I like what I see.

The book isn't perfect, mind you. It's almost more of an SRD. The bestiary is far too small, there are a few typos and obvious copy/paste errors from where they lifted some rules from Dragon AGE but didn't update some of the language to reflect minor changes to the rules. Still, it is far from unusable as is, and the system itself is light, flexible, and easy to learn. Furthermore, it's FUN. A friend who went to GenCon grabbed a hard copy from GR's booth for me.

I am currently taking the opportunity of a brand new system to inflict a brand new setting and campaign on my group. Rather than designing the whole arc and filling the world with details for them to uncover, I am taking a different route.

There is a map. A gorgeous one I paid to have professionally drawn (which I will share when I have the final version and have paid the artist the rest of his fee). I have outlined a few paragraphs about the world and the races, and seeded a few hooks based on players' input. Beyond that, it is an open page. I am trying to keep my footprint light on the world, allowing a slightly more collaborative process with the players. Now, that isn't to say it's all diceless storytelling! But if a player has a good idea that makes sense, why not incorporate it somehow? It's an experiment for me, and I'll be moving in slightly less familiar waters, but that isn't necessarily a bad thing. 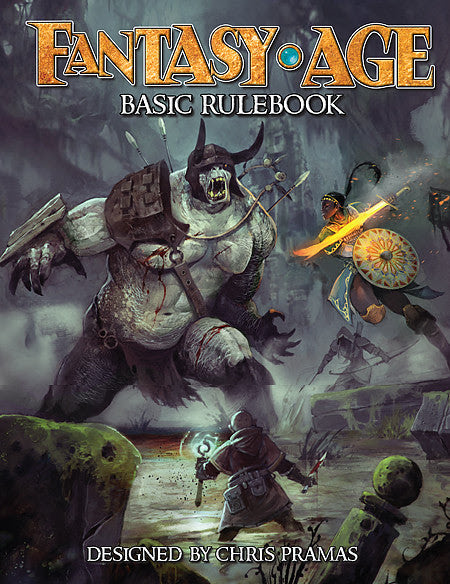