An exercise for the writer: Ready-made NPC party

Back in the day I posted regarding the BX rules for creating an NPC Party. As I've been looking at using things like peasants and NPCs in an adventure I'm working on, I thought I'd go ahead and generate a party for general consumption and as a walk-through of the process.

(It's quirky/interesting that the higher chance for fighter is split up at the top and bottom of the die results instead of just 1-2 or 7-8.)

So I rolled 8,1,2,5,1, and 4. That's three fighters, a magic-user, a dwarf, and a thief. This is a pretty muscle-heavy party, but maybe the wizard is after some ancient magic. The thief and the dwarf are there to foil traps and find their way in the deep places of the world. The group gets the mundane loot and the mage gets the mystic relic.

I rolled a mix. We have a 1st level dwarf, a 2nd level thief, one of each level fighter (1st, 2nd, and 3rd), and a 3rd level magic-user. This actually jibes well with the imagined scenario above.

4) Next, alignment. Same spread as levels, but Lawful/Neutral/Chaotic.

OK. The rolls make it pretty weird. Everyone except the 1st level fighter and the thief are chaotic. They are both lawful. It fits okay with the idea that they are all mercenary types, maybe hired by the wizard by the promise of loot. The chaotic wizard makes sense too. Maybe he's seeking black magic of some kind. Things might be kind of tense for the junior swordsman and the trap sweeper. Plus, a chaotic dwarf? Wacky!

5) Randomly determine spells. This will be interesting!

The magic-user gets two 1st levels and a 2nd level. The results are Light, Floating Disc, and Wizard Lock. Those are...unusual spells for a mage, but random is random!

6) Roll for any treasure. The book says you can also choose special treasure to give the party, but in keeping with the spirit of chance, I rolled and got nothing for them. The NPCs given that most of the PCs are higher than 1st level, one might assume they've somehow lost any treasure they'd won in previous adventures, or maybe they spent their cash on gear for this expedition.

Now, you could stat these characters out more fully with scores, equipment, etc. but at this point it's really just PC creation repeated a few times. As I mentioned in the earlier post, the Expert rules increase the level ranges for more powerful NPCs. 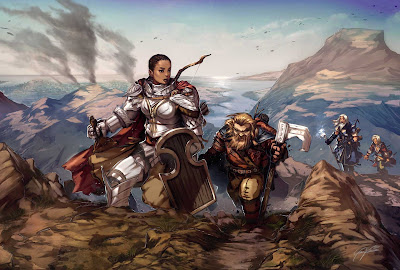