Endgame, part 2: Fighters, aka The Lords of the Land.

So the idea is that the whole “endgame” thing is a big part of what name level fighters do. 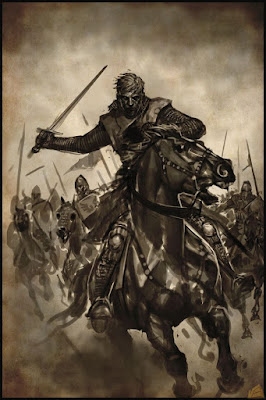 Fighters reach ninth level at 240k xp, which is fairly middle of the road, advancement-wise. Using our earlier Tarnskeep example of a 175k gp price tag, it’s likely the new Lord would have enough scratch to at least start the construction process.

Unlike clerics, BX fighters don’t automatically attract followers to their castles. In fact, only clerics and thieves gain followers by default. Why is this? Well, it seems to me that a cleric’s followers aren’t really his. They are followers of his faith. We’ll talk more about thieves in a later post. A fighter must gather men with the force of his personality (CHA) and by the promise of rewards. If he hires mercenaries and leads them well, he might recruit more easily in the future, but in the end the soldiers will want their pay.

Another fun tidbit mentioned on X7 is that:


“When a fighter reaches 9th level (Lord/Lady), the character may become a Baron or Baroness  and the land cleared and controlled by that character will be called a Barony.”

So the assumption is that the fighter joins the ranks of his homeland’s nobility. (Note: While it’s not really a “BX product,” GAZ1 (Karameikos) does do a pretty nifty job of integrating these aspects of play into the societal/political structure.) DMs can harvest a lot of plot fuel from characters that are not only vested in the current power structure, but under an oath of fealty to serve it!

This also makes a Baron or baroness all the more interested in attracting settlers to their lands in order to collect taxes to help pay for their soldiers. When the crown calls in the banners, a lord that cannot respond might lose their fiefdom!