Getting the Word Out: Communication in a BX World.

For a radical change of pace, I was looking at the Moldvay/Cook rules and noticed something that I found interesting: I've always assumed that a society with access to relatively reliable magic would be able to use it to communicate over long distances. e.g. relaying messages across hundreds of miles in moments instead of days, telepathic communication, etc. This came up as I was noodling with an idea for an adventure: A nobleman dies in the capital, and the PCs must get word to his heir out at the distant estate. Why, I thought, would the PCs need to be sent? Can't the people involved just magically notify the heir? 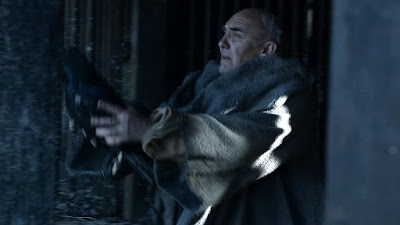 Turns out, not so much.

The fastest way to magically send a message, BtB, is the teleport spell. That's right. You need to zap someone from point A to point B via a 5th level MU spell. That means a name level wizard (or elf), a pricey scroll, or a Helm of Teleportation (a seriously odd item in its own right)  is involved. Things like a Crystal Ball allow for observing, but not sending to, distant locations. If one went full palantir, there could be a network of such items where the operators could check in at preplanned times and literally read the writing on the wall left for them to see, but multiple crystal balls quickly becomes an expensive proposition.

Every method in the BX rules that lets a PC communicate over long distances actually requires that the distance itself be traversed (even if instantaneously). Of course this led me to think of flying carpets and winged mounts like griffons or pterippi (look it up). 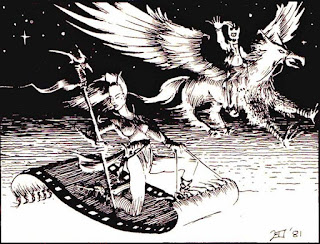 What if a country's ruler kept a small "fleet" of winged messengers for the most critical of missives? Sure it's way faster than a man on a horse, but it's not instant. The message can still be intercepted. Mounts must rest, and carpets carrying more than one person aren't terribly fast, so the rider probably needs to stop to sleep, so people wanting to literally kill the messenger would probably get at least one opportunity. The fact is, most long distance communication would be written on sealed letters and delivered by horse or ship and take some time. This would also have the effect of driving up the value of things like griffon eggs or similar. Likewise successful research into a long-distance sending spell.

I don't know why, exactly. But that makes me smile.
Posted by Bighara at 9:00 PM