Endgame, part 5: Halfings, aka "There's a new Sheriff in Town!" 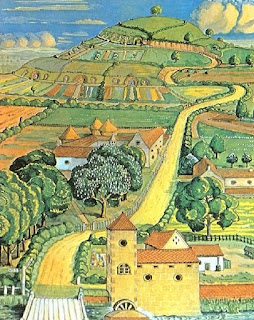 Down, down to Hobbiton. You go, my lad!

Halflings are an odd one in BX. I've already espoused their general kickassery as adventurers. Their name level/end game scenario is quite different from the human classes', and only slightly less so compared to other demi-humans. A lot of this can probably be chalked up to the Professor's influence on the class' conceptualization. The LOTR/Hobbit overtones are quite strong. Some later TSR products, like "The Five Shires", offer some different takes on halflings, but we're dealing with straight BX for now.

Since the halfling XP chart caps out at 8th, they reach name level ("Sheriff") before anyone else (120K). As Sheriff, they don't get troops or apprentices. If they build a stronghold, they get "a whole community of halflings." Numbers aren't specified, and I assume are at DM's discretion, but it's interesting that the halfling gets by default what fighters need to entice to their lands. It should also be noted that technically, a halfling doesn't need to wait until eighth level. X7 specifically states he can set up a shire "any time a halfling has enough money."

There isn't any overt mention of clearing a hex or getting a title from the local rulers, but since halflings "prefer pleasant communities in fair countrysides," it seems unlikely that such prime real estate would be unclaimed in any civilized territories. Again, JRRT's idea of hobbits having a secluded nature is coming through here.

In terms of gameplay. I suppose a halfling sheriff would get taxes and could hire mercenaries to protect his borders (bounders), but he isn't really set up to do a lot high level adventuring. Unlike the human classes, he isn't going to progress any further (not in BtB BX, at any rate). 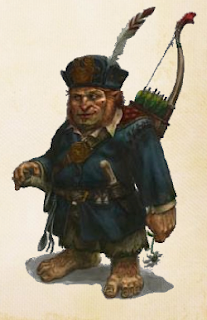 I do see some interesting roleplay opportunities when it comes to things like trade and diplomacy. A fertile land producing goods and commodities, which a powerful character protecting its interests could influence a lot of things in the wider world. Assuming you break with Tolkien's isolationist model enough to have the halflings get involved in such matters.