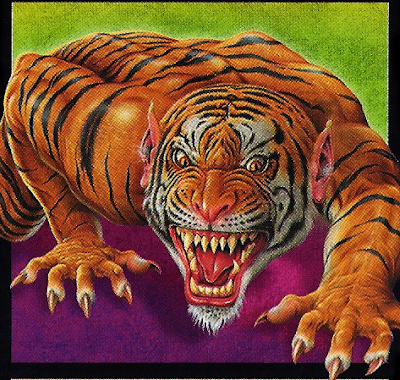 I've talked about tigers before on this blog. It's pretty obvious that they are intimidating creatures all on their own. Weretigers add a layer of fun with the lycanthropic powers.

So we can see that the weres are getting progressively tougher in terms of raw combat power; better AC more hit points, 3 attacks now, doing up to 24 points of damage per round. All very impressive. The thing that the weretiger brings to the table is stealth. They surprise on a 1-4 (like normal tigers) and are described as "quiet trackers." This fits with normal tigers behavior in the real world. They are ambushers, moving with alarming speed and savagery when they want to.


Warning. There is some blood in this video.

Couple this with the weretiger summoning 1-2 more great cats to its aid (not necessarily tigers), and a party can be in for a rough time. Weretigers are also the first lycanthrope with enough hit dice to be immune to a Sleep spell, so the easy 1st level spell drop is no longer an option.

Weretigers, like wereboars, are Neutral. They are described as "very curious but becoming dangerous when threatened." This implies they aren't necessarily out to cause trouble. Which is an interesting difference from the classic "killer werewolf" trope in fiction. It may just be me, but this gives an impression of lycanthropes sometimes just going about their lives and being a regular part of a BX world as opposed to the tormented, evil, or cursed individuals wreaking havoc.


Weretigers also move things out of the western/european model into the "exotic east." Despite the fact that weretigers do not appear on the jungle encounter tables, one would expect to see them (or their mundane counterparts) in a tropical or eastern style locale as opposed to a "medieval fantasy" type village.