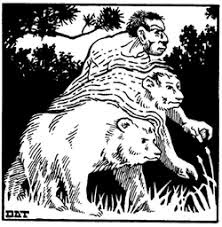 Now we come to the final entry among the were-critters: the Werebear. I've written about normal bears before. The were version is a fair bit tougher, stat-wise. In fact, they're closer to cave bears.

If provoked, these creatures are pretty dangerous. Their armor and morale are quite respectable. In addition to their normal 3 attacks, they can hug for an additional 2d8 damage if they hit with both claws. That's potentially 4d4 + 4d8 damage to a victim in a single round! That's an average of 28 points of damage. Even if that doesn't kill a foe, it could easily set them up for lycanthropic infection; even a name level fighter (9HD) only has an average of approximately 30-40 hit points.

As formidable as they are on the lycanthrope ladder, werebears in D&D are interesting for being the only ones listed as potentially friendly. They are also described as "very intelligent, even in animal form." This is taking a pretty far step from the raging beast within stereotype of things like "Wolfman" movies, etc. In fact, I wouldn't be surprised if a lot of the inspiration for this particular -ahem- "skin changer" came from someplace else. 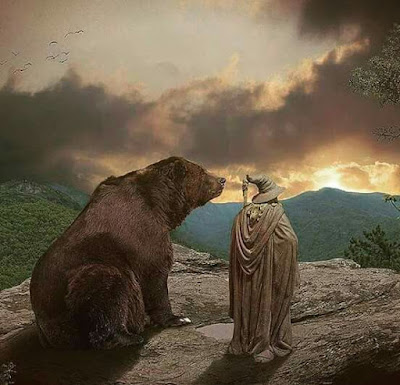 hmmmm. What could it be?

To be fair, there is a rich tradition of shape-changing bears in Native American folklore, too. I can't help but think that Beorn is at least part of this monster's origin, though.