I'm sure someone somewhere has written or reported upon exactly why Gygax & co. were so keen on including so many different amorphous blob-like monsters in D&D. Don't get me wrong; oozes and their ilk are fun encounters. Heck, I wrote a whole module full of them! But one does have to wonder sometimes if we needed quite so many options in this category. Nevertheless, over the next several posts I'll be taking a look at those escapees from the petri dish  which can be found among the pages of Moldvay and Cook starting alphabetically with the Black Pudding.

So the immediate takeaway from these stats is that this thing can take more than it can dish out. It's HD is very respectable, but it has relatively weak saves and moves quite slowly.The high morale fits its mindless nature. Black puddings are particularly dangerous for two main reasons: They can seep into almost any location within the dungeon, and just smacking them makes a bunch of lil' puddins. but since fire circumvents that, it's not hard for a knowledgeable party to switch to flame-based tactics (torches, oil, fireballs, etc.). 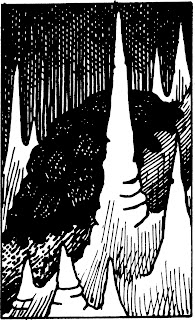 Regarding its ability to split up into 2HD mini-puddings, no upper limit is listed but logically it seems that 5 x 2HD would follow from its 10HD total. A nasty feature of the pudding is the fact it can corrode metal. This means that most loot (coin, weapons, etc.) will be worthless in one turn. Though I would argue magic items might get a saving throw.

Because the pudding has no treasure of its own, and has a tendency to corrode what it touches, it's not a great monster for the party to seek out as a way to get lots of gold or XP. Admittedly, 1600xp for killing it is nice, but that's not that much for a party that's high enough level to deal with it once it's split 4-6 ways.

Despite being slow, the pudding can dissolve wood, which means it can get through most doors eventually. Plus it can climb walls, cling to ceilings, and squeeze through cracks. I imagine this blob as a menace from the shadows (they're black, after all), relentlessly stalking its prey. It is easily outrun, but continues to seep along behind. 3d8 damage and a THACO of 11 means that unarmored magic-user that's keeping to the back of the party could be the target of a melt-ambush.