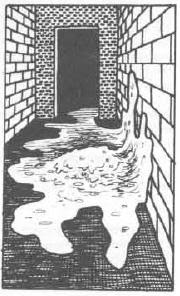 Rounding out the BX slimes is our final entry, the Ochre Jelly. This is probably the least used one in my games. Not that I dislike it as a monster, but there's only so many instances where an ooze is needed, so something has to give. OJ seems to be in many ways a "lesser" black pudding. It's worth noting that the pudding is the only one in the Expert set, probably due to its high HD. The jelly has half the HD and lower damage, but behaves similarly. Before we dive in the ochre jelly (ew!) let's have the stats:

The OJ shares the usual ooze/slime traits: unintelligent, relentless morale, slow movement, etc. Like other gooeys, it isn't harmed by all types of damage. In the OJ's case, only fire & cold affect it. Otherwise it splits up like the pudding (up to five of them). The 2HD baby jellys do half (1d6) damage. The jelly looks like an amoeba more than just a pile of goo, so it has a bit more form than most slimes. 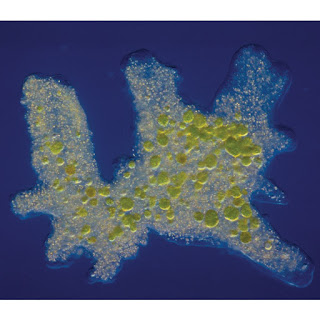 Its corrosive effect doesn't harm metal or stone. That doesn't make a platemail-wearing fighter immune though. It can still seep through cracks and seams. It can demolish wood, leather or cloth in one round (!) so that spear shaft or bow might be toast. I would also think things like magic cloaks, etc. might need to make some saving throws pretty quick.

Overall the ol' YellowJelly would be a respectable threat to low levels PCs and, like a rust monster, make almost anyone fear for their gear. Its susceptibility to fire give the party an easy way to cope IF they know about its specific weaknesses. In classic D&D, smart players are weighing the risks, though. Unless there is something beyond the jelly that is (potentially) worthwhile, it has no treasure of its own as a rule, and even with a special ability bump to XP, no one is leveling just for taking one out. As a DM, I would want to use the jelly in surprise situations or as an impediment to overcome for a larger goal. Perhaps a mad alchemist figured out how to bottle one up and chucks the jar at the PCs like a grenade? 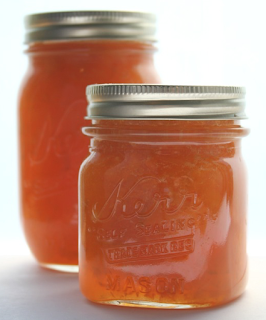