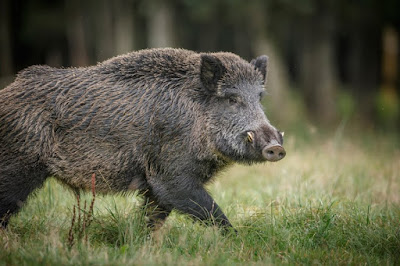 Sus scrofa, or Wild Boar, is a perfectly normal critter. It's not giant or magic or dire. Unlike it's more fantastical "cousins", the wereboar and devil swine, it lacks special or supernatural abilities. So why bother listing it in the monsters section at all?

Well, first off, boars were all over the place in medieval Europe and Asia, so a fantasy world based on that sort of period would likely have them as well. They appear in the grassland, woods, river, inhabited, and jungle encounter tables.

Let's have the stats, shall we?

As a straight-up fight, boar are low on the risk-to-reward scale for PC types. They are fast enough and just tough enough charge in and to bang up the party without giving them much in return. No treasure and only 35 xp each. Their morale isn't awesome, but they'd probably stick about for a round or two at least.

There are a few scenarios where I could see featuring these animals in adventures or even just an encounter.

Pigs are omnivorous and are not shy about carrion. Popular fiction has periodically used this fact to add a sinister aspect to their feeding habits.

Imagine a crime boss who keeps a boar pit outside of town for such a purpose. Or what if someone was killed in the woods and a sounder of boars found the body? Maybe something important or valuable was on the corpse when they started to feed?