So my hiatus is over. It was nice to recharge the old batteries. I also took the opportunity to clean up and re-design the gaming/painting area of my basement. I swapped out for a slightly smaller table, so it's a lot less cramped.

I have offered to try running a game for the group with a system I have played at cons, but never GM'd: Goodman Games' Dungeon Crawl Classics. I've been reading up on the rules, prowling the forums, looking at modules, and listening to a slew of archived episodes of the Spellburn podcast. I even got a spare set of "Zocchi Dice" for the table to use if they don't have their own d14s, etc.

The system looks to be a lot of fun. I am just getting to the point where I feel comfortable with most of the rules. I am still reviewing the book a lot, though.

I hope the group is OK with it, I've gotten some tentatively positive feedback about trying the game, but not a general buy-in. The idea is to run a 0-level funnel next week. I'm thinking either the sample adventure in the book or Sailors on the Starless Sea. 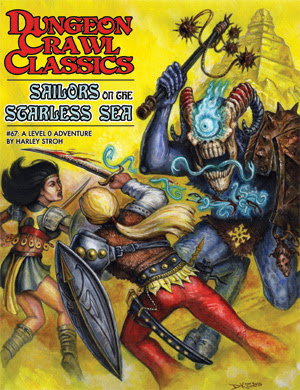 I don't know how much I want to rely on modules if things work well enough to become an actual campaign, but it might be a good place to start.

Onwards and upwards!
Posted by Bighara at 11:01 AM