Sometimes the simple "fire & forget" spell mechanics can make magic seem a bit too reliable. Not to mention the simple bonuses and spell-like effects of most items. It's nice to inject a little unpredictability, or even fear, into dealing with magic.

Cursed items address this nicely, and are just too much fun (from a DM's perspective). Some gamers complain that a cursed item is just a "screw you" tactic, but I've come to think of them as a marvelous flavor enhancer (like garlic) for magic in general. 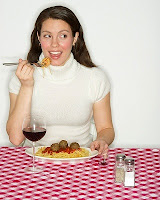 The secret ingredient is Evil!

It calls up images of failed attempts at crafting an enchanted ring or a botched spell scroll. It seems less likely a mage would waste the time and money making a cursed item on purpose, but maybe some trickster god likes swapping them out for the good stuff.

Now, you could make magic more unpredictable with a mess of house rules, but most of those just end up weakening the character or the loot, causing no end of player kvetching. Cursed items are a By-the-Book way to liven things up and even open up some interesting RP and story opportunities.

For nearly every type of item, there is at least one cursed version. Just going by Moldvay, we have:

Potions: Poison. That's simple enough. "Ooo! A potion! GAK!" Now, most PCs won't just slug back a random potion, but if you are using the B/X rules, you ID a potion by taking a small taste (B48). The poison, of course, is lethal at any amount. Pretty nasty, but hey, you decided to sip from a bottle of some unidentified substance you found in a cave. No one put a crossbow to your head.

Other potentially "cursed" potions might be polymorph or petrification-based. Delusion is a fun one. As is a Love Philter.

Rings: The two that B/X list are Delusion and Weakness. Like the potion, Delusion is a fun one for messing with a character's head. Weakness is straightforward enough, though it's harder to come up with a reason the PC would resist taking it off.

Scrolls: The Cursed Scroll is one of the more fun options on the list. It affects anybody who even looks at the writing (Note: it says "looked at", not "read.") The DM is given some latitude here, like with the spell, but some of the suggestions included are awesome. Re-rolling your Prime Requisite and a magic item disappearing are among the wackier.

Miscellaneous Magic: Bags of Devouring don't get used enough, IMO. And the Helm of Alignment Change is frankly more plot-based RP ammo than a DM should be allowed. To my thinking, a Mirror of Life Trapping is only semi-cursed. As it has some serious power the PCs can put to use through clever play. 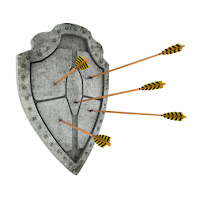 Weapons & Armor: Things like a -1 sword or shield are pretty simple. I'm a big fan of things like Shields of Arrow Attraction (not a BX item), etc. I feel it's important –as with all cursed items– for the DM to emphasize that the character thinks the item is awesome, and will resist giving it up. I've found most players will embrace the RP opp.

Wands, Staves, and Rods are the notable exception with no BtB cursed versions (at least in B/X), but it's not hard to think up a few. One of my favorites is a Wand of Magic Missiles that "backfires" on the caster, although that is almost more of a trap.

So when is it a good idea to include a cursed item? Well, "Let the dice fall where they may" isn't a bad method. Sometimes stuff happens. Rationales can be applied later. Maybe the reason the evil warlord isn't carrying that magic shield is that it's CURSED. Of course, instead of throwing it out, he put it in a chest for foolish do-gooders to pick up. While I don't think a PC should be out & out killed by a cursed item (poison notwithstanding, and they get a saving throw for that), the idea that a bit of caution can save a lot of grief is a good lesson for them to learn. The downside is that it encourages paranoid play and players are unlikely to fall for it again. At that point, it's time to step it up a bit and start sprinkling a few cursed items "with a twist" into your game.