Now I don't really know how this one slipped past me, because it is just too cool!

Description: These golems are made of petrified tree sap, and this golden stone is commonly formed into the shape of dire wolves or large cats. They have the ability to detect invisibility to a range of 60', and are able to track any being. 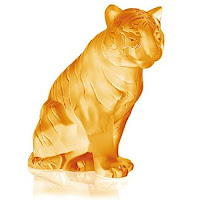 So check this bad boy out. It's faster than a human being, heck it's faster than a warhorse. A riding horse will outpace it, but the A.G. can track any being and doesn't have to rest. At AC6, 10HD, and unaffected by nonmagical weapons, it is not easy to put down. A 10HD critter has a THACO of 11, so it is hitting most of the time with its THREE attacks per round!! Not to mention the insane amount of damage it's dealing with those attacks. (An average of ≈25 points per round!)

The detect invisible is a nice touch as well. This thing is like an magical terminator. It doesn't think, it doesn't feel, it doesn't eat, and it doesn't sleep. You can't hide from it. It just relentlessly tracks down its target and WHAMMO! I can easily envision scenarios where a ticked off NPC with resources commissions one of these suckers to hunt down an adventuring party that had crossed him.
Posted by Bighara at 2:20 PM