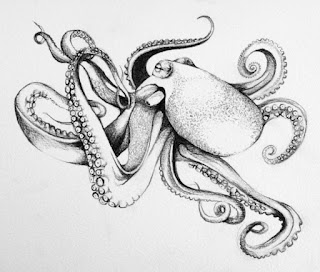 While octopuses (no, it's not "octopi") and squids feature heavily in fantasy and science fiction, the fact that they are aquatic means they aren't typical encounters. Also, once the party is on or under the waves, there are so many other more interesting creatures to toss at them: things like Sea Hydras, Dragon Turtles, Sharks, etc. Most of the octopus's appeal for a fantasy setting is its alienness. Face it, this tentacled, boneless creature swimming around is kinda creepy. But creepy is only going to get you so far. Can the octopus hold its own in a fight?

Let's see that stat block, shall we?: (from Cook Expert)

OK. First off, if you're like me what jumps out at you is the attacks entry. NINE ATTACKS PER FREAKIN' ROUND! Now, that's pretty scary. But wait! There's more!

Once it hits with a tentacle, then it does automatic constriction for the above 1d3 every round per tentacle.  Also, for each one of those you have wrapped around you, there's a cumulative -1 to hit penalty.  So, to do the math: An 8HD creature has a decent THAC0, so if it hits a character with even half its tentacles, then its dealing 4-12 points per round (without having to roll to hit). It can also keep biting for an additional 1d6, and wrapping any of the 4 other tentacles that aren't busy (yet). Meanwhile, you are at -4 to fight back.

Things the characters might have going for them: the G.O. has lousy AC and is skittish (low morale), so it's possible it might flee before finishing off a victim. Octopuses are smart,  though. It will probably take each case as it comes.

While not stated in the book, octopuses can blend like a chameleon, which would make it much easier to surprise a foe. Also, depending on exactly how a character has come to be underwater with this thing, they might be at a severe disadvantage because of the environment (lack of air, etc.). I typically only allow a PC to hold their breath for CON x rounds, they receive no DEX bonus to AC,  movement is slowed, and encumbrance or metal armor can drag a person down. All these factor make the prospect of this thing's embrace very scary indeed.
Posted by Bighara at 10:58 AM