I posted about the amber golem a little while ago. There are lots of golems in classic D&D. It seems stone, iron, and flesh are the ones that see the most play, but some of the others are darned cool. And scary as all get-out. 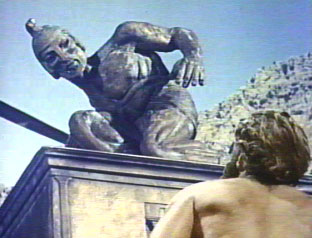 First off, some stats (from Cook):

They are described as resembling fire giants, which would put them at approximately 16' tall. 3d10 damage from a fist is bad enough, but the thing is full of liquid fire! This means it's scalding even to touch. A hit does another d10 damage from the heat alone (unless a resist fire or similar is in effect). This also means it's immune to fire-based attacks. (Some like it hot, I guess!)

Oh yes, there's one more thing I neglected to mention about this patina'd powerhouse. If you do manage hurt it with that lovely +3 longsword you're carrying, the wound sprays liquid fire on you! You can make a save to avoid it, otherwise 2d6 damage from what's basically lava spattering your face.

Moving on from the fiery aspects, did you happen to notice that movement rate? I guess being 16' tall gives it a long stride. It has AC 0, which is darned respectable, and TWENTY hit dice! Even a middle range model is sporting close to –if not over– a hundred hit points. It also means it's hitting rather often.

Like all golems, it cannot be hit be non-magical weapons. It is immune to Sleep, Hold, and Charm spells as well as poison gasses, etc. So, if you're facing one of these things, what's the plan?

Seriously, though. It only gets one attack per round, and that's melee (not ranged). Keep your distance. Resist Fire would be a handy low level spell for this situation. Ranged attacks, especially spells like Lightning Bolt. A wand of cold would be nice, too. If you have to close, blunt weapons like a cleric's  +1 mace will avoid cutting the thing's "skin." Or he might use the spell Striking on a club to let it hit. Although even without the heat/fire damage, the cleric needs to be ready with some healing!

I can imagine this thing guarding a lost temple or a wizard's prize possession. Best of all, it doubles as a furnace, keeping the place warm in winter!
Posted by Bighara at 11:33 AM