I thought I'd move away from the more "normal" critters and take one of my favorites that you don't see so often in games. At least, I've only seen them a few times in play, and one of those times was in a module I wrote (so I'm thinking that one doesn't count so much). 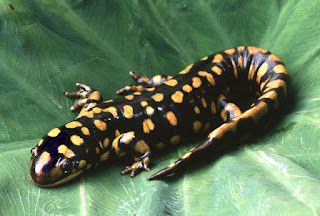 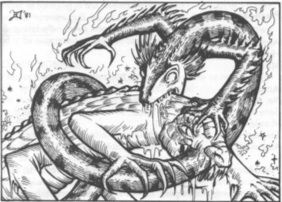 Flame: 12'-16' intelligent lizard-like elemental with four limbs. Scorching heat deals 1d8 damage per round (within 20'). Sleep & Charm do not work. Fire-based and non-magical weapons do not work.

Frost: Same as above except SIX limbs and cold-based.

(stats are LL based, but comparable to Cook Expert)


Now, unlike some previous entries, I don't think I need explain how these fellas are badass. I mean, come ON! Look at those hit dice! Look at that AC! Multiple attacks! You take 1d8 damage per round just for being within 20' of the thing! (That wimpy clerical resist fire or resist cold is looking pretty nice right now, huh?) They're intelligent, which means they can devise tactics and adapt to situations. Not to mention that you're always going to encounter at least two of the fire version BtB.

The fire-based ones are bad news, but that frost one? That's just NASTY!

It's worth noting that, according to some interpretations, protection from evil spells should keep the creatures from touching you (as "summoned"/extraplanar creatures), but that has no effect on the 1d8/round < 20' effect.

I think these things would actually make a great "boss" monster or final fight for a 4th-6th level party. That 5th level MU who's been so cocky since he got fireball is in for a nasty surprise!
Posted by Bighara at 10:34 AM