I've often wondered about the "door" spells: Hold Portal, Wizard Lock, and Knock. They seem so darned useful, yet players rarely take them.


I will note that one player in my group has a talent for coming up with excellent uses of atypical spells (she plays a marvelous illusionist) and used Hold Portal quite effectively in one campaign.

Others may know better than I, but I think that Hold Portal –and its older brother, Wizard Lock– is a spell with its roots in the megadungeon. When parties are several levels below ground and need to rest for the night and hole up in an empty room, being able to seal the door against intruders is a nice trick. Likewise when you open a door and see something you do NOT want to deal with on the other side, a quick slam-and-cast can give the PCs time to escape a horrible fate. 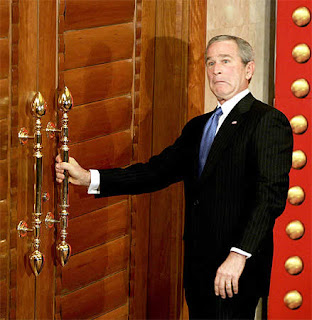 "But, Big H," I hear you asking, "Why not just spike the door and save a spell slot?"

Well, spiking a door takes time, time you probably don't have when the gnolls are about to yank the door open and cave your head in. Hold Portal and Wizard Lock can be pounded through in a round by bigger critters (3+ HD), but that's a round to run away.

There's another adventuring use for these spells as well: preventing escape. When that kobold flees to warn the tribe, you can keep it from opening the room's door. Thus giving the fighter time to cut the creature down.

Wizard Locking chests, etc. is also handy, but possibly less useful on an adventure. It might be good to use when leaving equipment unattended in town, though.

Knock is, of course, the antithesis of the others. The fact that it's 2nd level means casters are going to start off thinking about other spells (like Invisibility), but Knock is dead handy. Portcullises, doors, chests, gates, known secret doors, etc. None of them stand up against Knock. It lasts a round with a 60' range, so the MU could sweep an area from a distance, popping every lock in one go while the party hangs back. Not too shabby, IMO. Of course, there are many doors in a dungeon, and chances are the MU (or Elf) isn't going to take the spell more than once or twice per day, but when the thief can't pick the lock, and the fighter can bend the bars, let the scrawny step up and handle it.
Posted by Bighara at 9:49 AM