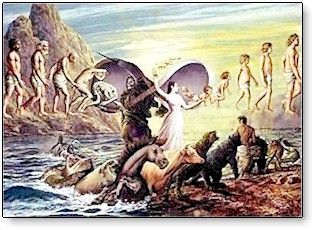 This is one my favorite spells I've never seen used. I've heard campaign stories involving it, but I've never had it come up in a game I've run or played in. I think part of the problem comes from the fact that it's a high enough level spell (6th+) that a party that's powerful enough to be casting or paying for such spells will just go for Raise Dead or Resurrection instead of the far chancier Reincarnation to restore a dead comrade.

It's a shame, though. Despite some of the silliness –or perhaps because of it– Reincarnation is just riddled with possibilities. Before we get into it, here's some crunch:

In BX, it's a 6th level MU spell (I like how it's not divine/clerical in nature). In LL's AEC, Druids can cast it too.

Basically, what happens is that the spell "grows" the departed a whole new adult body. The exact nature of the body is random, though. Rather than try formatting the table here, I'll just provide an image of it from Cook Expert. 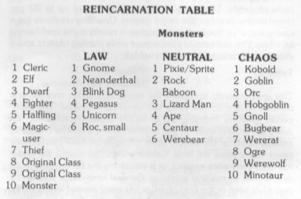 Now, as you can see, the odds favor coming back as some sort of PC, though not necessarily what the character was to start with (although you have a 30% chance of it). Since it doesn't state either way explicitly, the GM might have you keep your scores or re-roll. Frankly, I'd opt for the latter and maybe even roll for gender, but YMMV. You can't start higher than 6th level (d6), and your previous level can cap it before that. It's a little odd how a newly formed person can just "become" a class like cleric, but hey, it's MAGIC! The real fun begins when you roll a 10, however.

Monsters don't gain XP or levels, so if you end up a Lizard Man, you're stuck as a 2HD critter. That's kind of harsh, but the rules at that point didn't really have rules for monstrous PCs and a GM can tweak his game as he will.

While results like Ogre, Minotaur, "Weres", or Centaur might catch some eyes, the ones that I find particularly amusing include Ape, Roc, Blink Dog, and Neanderthal. The idea of a party with a sentient giant bird as a member, or a cave man, brings a smile to my face. Just think about the sheer level of roleplaying fun that could occur because of this.

As I said before, I think Reincarnation is unlikely to be a party's first choice for bringing back the dead. I do not think, however, that's the only way to introduce the spell into a campaign. Perhaps a curse that causes a character to never "die" but if he is killed, he is instantly reincarnated (preventing Resurrection and other spells from being used) into some other form? Maybe a magical trap that reincarnates those who are killed by it? Or a mad wizard who reincarnates PC(s) that he slew, as part of some bizarre plan?

I think a GM would want to be careful here. You don't want to make it into an excuse to screw over a player, but –assuming whatever got them into that mess was at least partly due to PC choice– then it's all good!