This is a great spell. Seriously, can you imagine this spell in real life? Archaeologists, students, even tourists would love this spell! It's not quite the world changer continual light or cure light wounds would be, but it's still darned cool. However, in D&D it seems to be among the less popular low-level spells.

I think there are a couple of related reasons for this. First off, virtually every PC and NPC speaks "Common." There's no need to worry about the idea that your character is Thyatian and you're in Glantri. If there is something written in another language, you just ask a native to translate. Even if you're talking to a dwarf or elf, they know Common, too. Not to mention all the bonus languages demi-humans get. A high INT mage has a couple spare languages under his belt as well.

Another thing is that DMs frequently don't bother to worry about working these details into a game. Other than things like orcs that only speak Orcish, it's often seen as just a way to hassle the PCs. I disagree, but that's a topic for another time.

Apart from reading the menu at a Minrothad tavern, there's things like ancient writings carved on tomb walls, etc. to be dealt with. Remember, kids: Dead languages can be fun! 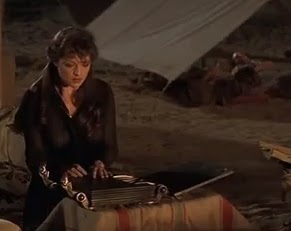 This should be a standard spell for dungeon crawling/exploration, IMO. If your game allows for PC scroll creation, one with R.L. in reserve would be a nice way for a low level MU to have it handy without using up a daily spell slot. Even with only 20 minutes (2 turns), you can read a lot of text in that time. Maybe not a whole book, but certainly enough time to translate the riddle that tells you how to keep the iron golem in the next room from ripping your heads off.

Idea: Magical lenses, similar to Eyes of the Eagle, that grants the wearer the Read Languages ability X times per day. I would think some scholar would pay a pretty copper for that.
Posted by Bighara at 11:11 AM