Okay, this isn't a really uncommon "monster." In fact, in many games, they are almost as much a staple as orcs. Bandits (Or "Brigands" in Labyrinth Lord) are a classic low level encounter. What prompted me to post on this was looking at some of the descriptive text listed in LL and BX.

First off the basic stat-block: (This one is from BX, but the LL one is very similar)

So what you've got is basically a normal guy with a weapon and maybe some leather armor. Nothing too wacky, there. Where I think things get more fun is in the number appearing. You can get quite a few of these clowns hanging around their lair. 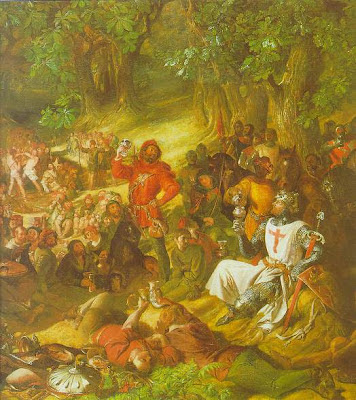 Now, in the Moldvay description, there is this brief passage about things like bandit leaders:

"...Bandits may have an NPC leader of any class, fighter, magic-user, thief, or cleric, who is of an experience level higher than the bandits."


Labyrinth Lord goes into a bit more detail (it also raises the number in lair considerably), but the essence is the same :


"...Half of all brigands encountered are armed with a short sword and short bow, and wear leather armor and a shield. The other half is better equipped with long swords, chain mail, a shield, and will have riding horses.

That's not a few ruffians waylaying travelers. That's a small ARMY! An average roll will yield over a hundred of these guys hanging around. Did I mention the fact they're led by up to three 8th-10th level NPCs!? Let's break this down, shall we?

Now there is the leader, too : a 9th level fighter. 30% of the time, he's got an eighth level "Friar Tuck" that can cast up to 4th level clerical spells, and half the time he's also got a 9th to 10th level wizard with him! That's fifth level spells, pal.  Can you say Animate Dead, Cloudkill, or Conjure Elemental?

So your "inner council" here adds another 26 or so HD to the mix. (≈250HD total) This is a fiefdom, people. There must be servants, artisans, etc. supporting this group, not to mention some sort of fortifications. They'd have to be levying food and supplies (basically tribute/taxes) from the countryside. Just robbing wealthy coaches and hunting te occasional deer ain't gonna cut it.

Can you say "Robber Baron"? If this "Bandit King" is not the official local ruler, he ought to be (or may well be de facto).