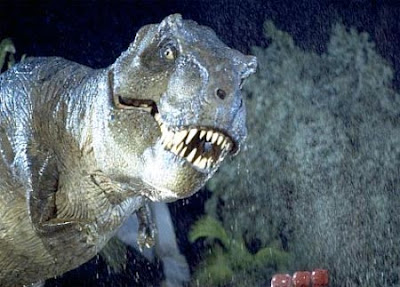 Okay, be honest, outside of X1: Isle of Dread, who has ever used a Tyrannosaurus Rex in a D&D adventure? Or any dinosaur, for that matter? Maybe this puts me in the minority, but I honestly cannot recall a single time, myself.

There are probably two main reasons for this: One, in a world with dragons, it sort of seems superfluous to include these ancient reptiles, and the "Lost World" motif just hasn't come up (my players have never made it to the Hollow World in Mystara). Secondly, dinosaurs in general –and T Rex in particular– are UNBELIEVABLY NASTY! Check these stats out:

(Do I really even need to break this down?) 20 hit dice! Twenty! That's 2-0! Easily into triple digit hit points. AC 3: That's plate w/no shield. Saves as a TENTH level fighter! 6-36 damage! And it outruns a typical armored adventurer-type. At an 11 morale, it's not running away any time soon either (would you??).

The T-Rex's main weaknesses (if any) are

A) There's only one of them at a time (small mercies)
B) Halflings. Yes, hobbitses are T-Rex kryptonite.

Well, maybe not quite kryptonite, but a T-Rex BtB (by the book), ignores halfling-sized prey or smaller. Couple that with the little guy's hiding ability, excellent missile proficiency, and general combat studliness (uses Fighter to hits) means he can potentially whittle this monstrosity down a bit without becoming a primary target. Now, if Brodo decides to stand toe-to-toe with ol' Rex and swing away, Mr. Scaly may sit up and take notice, deciding upon a furry-footed appetizer.

Beyond X1 or a lost world game, I see the chances to use such a creature as being somewhat limited. I can think of a few evil ways to spring one on the PCs, though. For example:
Frankly, a party running across one of these is probably a party that needs to ask itself, "How badly did we REALLY need to go this way??"

And hamstring one of the pack mules before fleeing.