I'm usually hesitant to throw a lot of monsters with "Save or Die" attacks at a party until they are higher level. Most such creatures are fairly big and/or tough, so are generally better for mid-level or more. This little fella, though –despite its modest stats– is doubly nasty.

Spitting Cobra
(stats are from LL, but are the same as Moldvay) 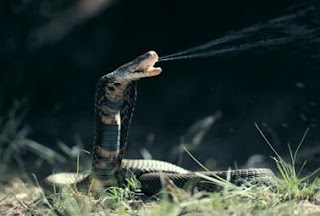 
Let's break it down, shall we? This sucker isn't magical. It isn't gigantic. It's a snake. What's more, this thing really exists, pretty much as depicted in the stats. If you are using Moldvay Basic, it's a level one wandering monster. It also pops up in Cook's jungle wilderness encounters. Not a LOT, mind you, but it's there. One good smack is probably going to kill it, and its AC is no great shakes either. It also has a low morale, so it's as likely to flee as to fight. So what's the big deal?

Well, there are two tidbits to keep in mind. One, this crazy reptile can bite you with "Save or Die" neurotoxin that kills in 1d10 turns. That's less than an hour on average, and less than two hours max. Secondly, it can also spray this venom with remarkable accuracy into your face up to 6' away. A hit means it's struck the eyes and you must make a save or be permanently blinded! Of course Cure Blindness will fix things, but that's a 3rd level spell, so you'll be needing a 5th level cleric for that. So the low-level party that stumbled upon a nest with 1d6 of these poison ropes may well have a long slog back to civilization with one (or more) party members effectively incapacitated (if not dead).
Posted by Bighara at 8:23 PM