Cure Disease does not tend to be one of the more obscure spells. It's 3rd level, so it's not being used a lot at beginning play, unless the party has access to a friendly NPC cleric; but between green slime, giant rats, mummies, and werewolves, CD is definitely on the characters' radars.

Our group periodically discusses various magic in the game and how, in a sane world which had access to 5th+ level clerics, the powers that be would have them casting spells like this assembly-line fashion. What I wanted to talk about is the reverse of the spell (Cause Disease), which tends to be more unusual in games, and much more interesting to me.

Obviously you don't see it quite so much because PCs would probably be unlikely to cast it, since most (certainly not all) PC clerics tend toward the good/lawful end of the alignment spectrum. This is a nasty, nasty spell. Have you looked at its effects? 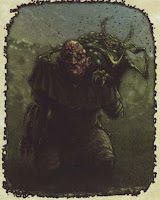 According to Cook, it inflicts "a hideous wasting disease". The victim gets a Save vs. Spell, of course. If he fails, this infection inflicts -2 to ALL rolls. That's pretty bad, but here's the real meat of it. Any wounds cannot be healed magically and the natural healing rate is halved. Oh, not to mention he will die in 2-24 days. The only way to get rid of this is –of course– Cure Disease.

All that is pretty terrible, even if it isn't going to take a powerful foe right out of a combat. Another fun tidbit is the range of the spell. Unlike Cure Light Wounds, which is a "touch" spell, CD lets you cast it on someone up to 30' away. Which means someone zapping a PC (or NPC) at a discreet distance (possibly hidden behind a tapestry or from the next room). You can also have various magical items, traps, or creatures that create the same effect.

Since there is a relatively readily available counter to this spell, it's unlikely that a PC getting infected will be unable to acquire a cure under most circumstances. If their party cleric can't cast it, though, being infected far from civilization can mean trouble. Even in town, a little GM creativity can go a long way. In fact, this gives me a great idea for an adventure! (I'll post more about that as I flesh it out a bit.)
Posted by Bighara at 6:30 AM