Well, I've run through quite a few monsters in my RMAs over the last couple of weeks. While I will probably revisit the subject again, I thought I'd branch out a little.

It seems that most spellcasting PCs tend toward several "staple" spells. Things like Sleep, Cure Light Wounds, etc. are extremely common in games where spells are not assigned randomly. This is with good reason, as they are remarkably useful in typical dungeon crawl-style play. Still, even in the "non-Advanced" versions of the game, there are oodles of interesting spells out there, many of which I can honestly say I've never seen used at the table. Submitted, then, for your consideration: some lesser-used spells and my thoughts about their usefulness. Our first entry is:


I gotta admit, I picked this one because of the above Jeff Dee illustration from Cook's Expert book. I just love the "Whoa!" reaction of the vampire.

So, first off a few stats: the "eye" has 60' infravision and can move 120' per round. "Solid barriers block its passage, but it can pass through a hole or space as small as 1 inch in diameter." Which is a nice touch, I think. It also requires concentration by the MU. Its duration (over half an hour) means a lot of scouting can be managed in that time.

Now, this may be reading into a simple pic too much (and the 1st edition version says its invisible), but the graphic above leads me to think there is an actual, visible, eyeball-like thing floating along. This would mean, IMO, monsters have a chance of noticing it. 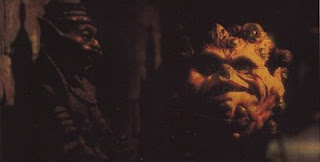 (Okay, maybe not quite THAT noticeable, but you know what I mean.)

There are several things I really like about this spell.
*A magic item allowing this ability, perhaps a wand or potion with only a few charges/doses, could be a nice find for a group.