Seriously? A weasel? One of these cute little fellas? 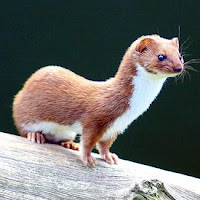 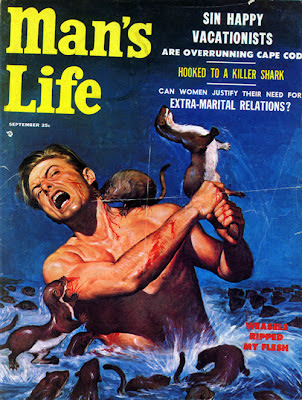 Weasel, Giant (once again, stats from LL, but the Cook Expert stats are basically the same.)

You'd think a 9' long weasel would be unusual, but they really aren't. They appear on dungeon and wilderness encounter tables, including inhabited regions! Most people who are familiar with members of the Mustelidae family know that they tend to be aggressive little SOBs. Wolverines, minks, badgers, etc.; these are not cuddly critters. So now you're dealing with up to six of these beasties, only gator-sized!

They are described in the monster listings as "fierce hunters." Swell. That means they'll happily bring the fight to you. The 4+4 HD means a decent to-hit (THACO 15) and no Sleep spell for them. They're fast, but the 8 morale means they're (somewhat) skittish.

2d4 damage is fairly impressive, but that's not the evil part. Check this little passage out: "when they successfully attack with their bite they cling to the victim, sucking blood for 2d4 hit points of damage each round. They cannot be removed, and will cling until either the victim dies or the weasel has been killed."

Cannot be removed! Talk about lockjaw!

Toss in their 30' infravision and tracking by scent, you've got packs of giant vampire tube rats slinking around sucking people dry. Eek! Actually, I imagine a wilderness encounter with these things involving something like horses or sentries bled dry in the night. In a crawl, they might have narrow tunnels burrowed into walls and such, zipping out to attack stragglers by surprise. Another excellent choice for an animal companion, if one can manage it.